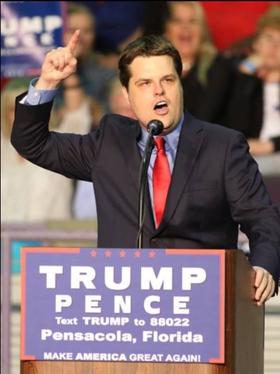 Northwest Florida Congressman Matt Gaetz is among those calling for the firing or resignation of FBI Special Counsel Robert Mueller. He’s investigating Russian interference in the 2016 Presidential Election. Now some of Florida’s gubernatorial candidates are jumping into the fray.

Gaetz made a formal call for Mueller to resign or be fired in November, during a speech on the floor of the U.S. House of Representatives.

“We are at risk of a coupe de tete in this country if we allow an unaccountable person with no oversight to undermine the duly elected President of the United States and I would offer that is precisely what is happening right now with the indisputable conflicts of interest with Mr. Mueller.”

Gaetz has been repeating it ever since during his media appearances.

Did Obamacare exacerbate the opioid crisis in America? And is expanding the child tax credit the only way the middle class will get a break from the GOP's proposed tax plan? We tackle those claims with Allison Graves of PolitiFact Florida.

The Trump administration’s decision to end temporary protected status for Haitians who sought shelter in the US after a major earthquake is drawing bipartisan pushback in Florida.

Former Democratic U.S. Rep. Gwen Graham, the only woman in Florida's governor's race, said Thursday she has a unique perspective that will allow her to address what she calls a sexual harassment epidemic in state government.