Floridians in need can now use a mobile app to locate food banks and support services across the state. 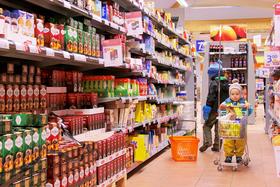 The developers behind FoodFinder believe too many people are going hungry because they don’t know what’s available to them. Founder Jack Griffin says for many low-income families, food insecurity isn’t their only concern.

“Familiar surroundings are pretty rare for these families because they might be moving three or four times during the school year, and changing schools, because their living situation is so heavily dependent on where they can afford to stay at that moment. So a lot of times they might not know where to go,” Griffin said.

Griffin and his team hope their searchable map of available services will make it easier for families to get the help they need. And Griffin says putting information directly in the hands of people experience food insecurity can help counteract the stigma of poverty.

“Kids are ashamed to ask for help because they don’t want to be ostracized. Parents, I can’t even imagine, having to come to terms with struggling to provide for my family. We just want to make sure that, whether it’s in the next five or ten years, that FoodFinder is part of the movement that says it’s ok, this problem isn’t something to be ashamed of,” Griffin said.

The FoodFinder Florida program is now accessible online and through mobile app stores.

According to the Annie E. Casey Foundation, more than half of Florida’s public school students are eligible for free or reduced priced meals during the academic year. Yet during summer vacation, the need for healthy, fresh foods can actually increase. But some local community groups are teaming up to try and fill in the gap.

On a recent Tuesday, the weekly produce market co-op at the Woodbrook Estates mobile home community in Lakeland was bustling.

Polk County is a place of so many contradictions. It's the home of beautiful lakes, charming downtowns and historic landmarks. But this birthplace of several of Florida's governors, was also named by one recent study as having the country's second largest percentage of people struggling to avoid hunger.