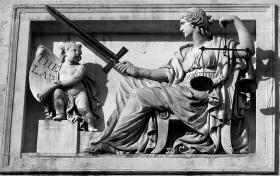 But then the scholarship program started to grow. Lawmakers approved a law that automatically expanded the program each year. Then earlier this year lawmakers raised the income cap. Now, a family of four earning $62,000 can receive a partial scholarship.

“There comes a time when there’s a tipping point that’s reached," Meyer said. "I think a lot of people turned a blind eye to the constitutional questions which were presented, even as this program was rolled out.”

The FEA, the Florida School Boards Association and others filed a lawsuit in the 2nd Judicial Circuit in Leon County Tuesday. The suit argues that the private school scholarship program creates two, parallel education systems and violates the 2006 Bush v. Holmes decision.

The suit also argues the program allows public money to benefit religious groups, a violation of the state constitution.

Doug Tuthill is with Step Up For Students, which oversees most of the tax credit scholarship program.

"I think it's unfortunate that the entire education community doesn't sit down and figure this out," Tuthill said. He thought the suit stemmed from a contentious legislative session, where lawmakers expanded the program and raised income limits.

The union also filed a lawsuit challenging the expansion earlier this year.

“This is not a battle between who’s better, public or private," she said. "We are here defending the right of a parent to choose what school they can place their child in.”

Tuthill did not have a timetable on when the case might be heard. Previous education lawsuits have taken years to resolve.

A Lee County social studies teacher and the state's main teachers union are filing a lawsuit to block a significant expansion of a private school voucher program.

The lawsuit filed Wednesday in a Leon County circuit court contends that state legislators violated a requirement that bills cover only one subject. The Republican-controlled Legislature attached the voucher expansion to an unrelated bill on the final day of the 2014 session. They took that step because a stand-alone bill failed to get enough votes.

Explaining The Research On Single-Gender Classes

So what does the science say? The results are mixed, as is often the case in education research.

Right now, schools determine whether to move a student into special education classes.

But a proposed bill in Tallahassee would give parents of children with special needs more power over their education.

Fort Lauderdale sixth-grader Mariah Harris has Down syndrome, and she wants to be a veterinary technician.

“My dream is to go to college with my friends one day,” she told a panel of lawmakers.