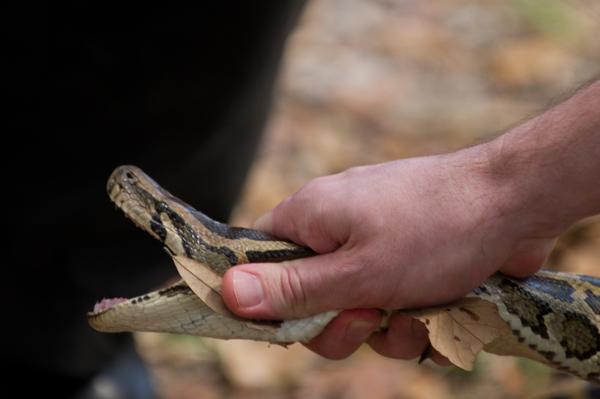 Florida wildlife officials are hosting another snake hunt, but they don't want to call it a hunt. It's the Python Challenge. It's not likely to put much of a dent on the growing population of the invasive species, but that doesn't mean the event will be a failure.

The Florida Fish and Wildlife Conservation Commission says it looks at the 2013 Python Challenge as a success because is raised awareness of the problem. The next challenge, set for early 2016, will do more of the same and give researchers a chance to learn more about Burmese Pythons and their painful impact on the Florida Everglades. Hunters can register this October.

Listen
Listening...
/
Jenny Staletovich of the Miami Herald talks with us about what researchers really know about the pythons and why they're hosting another snake hunt.

The 68 snakes captured in the last challenge showed researchers that pythons are evenly split in what they eat, everything from rats to rabbits to wading birds. Some snakes were also eating small alligators.

The following map was produced in partnership with the Florida Invasive Species Partnership and tracks hundreds of pythons reported, confirmed and captured. According to the reports, some of the snakes were never captured, just identified.

The FWC reports that pythons on average lay up to 36 eggs, but some have been known to lay as many as 107 eggs. They tend to start laying them in May and June.

Back in March, the federal government officially banned reticulated python, DeSchauensee's anaconda, green anaconda and the Beni anaconda. In 2012, the Burmese python, yellow anaconda, and northern and southern African pythons were banned. Most of the pythons are found south of Lake Okeechobee.

In 2013, 1,600 people signed up to be part of the challenge to hunt pythons. The wildlife commission has yet to post any information on their website pertaining to registration. They may once again offer cash prizes for capturing larger snakes.

Instead, the state is beefing up established programs that train licensed hunters and people who regularly work in areas known to contain pythons to kill or report exotic snakes.

Most drivers wouldn't do what Jason Leon did when he saw a large snake poking its head out of the brush beside the road: He pulled over, grabbed the snake and started pulling.

What he ended up with -- after a tussle and help from his friends -- was a record-setting giant Burmese python, as pictured on HuffPost Miami.

More than 1,500 participants of a monthlong python challenge have helped to capture 50 Burmese pythons in the Florida Everglades. The Florida Fish and Wildlife Conservation Commission updated the counts Tuesday for the "Python Challenge." The competition began Jan. 12 and ends Feb. 10.