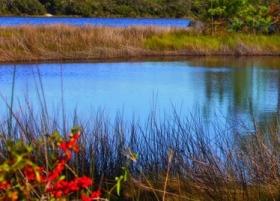 The amendment’s campaign manager, Will Abberger, says the result reflects the will of the people.

"Florida voters care about protecting the quality of our water, our natural areas, and wildlife habitat," says Abberger. "They, I think, have overwhelmingly demonstrated their support for increased funding, increased state funding for water and land conservation."

The constitutional amendment passed with about 75 percent support. It could generate up to $700 million a year depending on the real estate market. Opponents say it creates too rigid of a state budget, but supporters like Abberger say it was needed because the Legislature has cut funding for conservation.

Midterm elections are this Tuesday.  Florida voters will be voting for governor, along with three proposed amendments.

When the economy underwent a downturn in 2008, legislators began sweeping trust funds and diverting money used on land preservation and conservation to other causes.  But when the economy recovered, the money was never restored. So enough signatures were collected on petitions throughout the state to place Amendment 1 on the ballot.