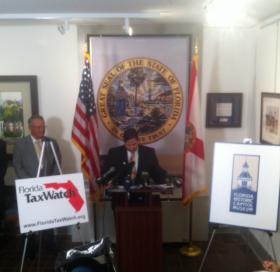 “We generally strongly maintain this view: When in doubt, keep it out,” Calabro says.  “It is a very sound proposal to keep – recommendation to keep – because there are so many unintended consequences when you amend organic law in our state constitution.”

The group expresses concern with Amendments One and Two, which it says are policy matters and best handled by the Legislature.  Amendment One would require a third of documentary stamp tax revenue go to environmental conservation, and Amendment Two would allow medical marijuana in the state.

But the group says Amendment Three is an issue that needs voter input. The initiative would require the governor to choose judges for future vacancies before a sitting judge leaves office, whether through term limits, retirement or losing a retention vote.  TaxWatch points out the amendment would give the next governor significant power over upcoming appointments, including three Supreme Court justices who won’t take their seats until 2019 – the year after the governor’s term ends.

The hot ballot issue in Florida in November is Amendment 2, which would legalize the medical use of marijuana in the state.

Backers of Amendment 2 say it's the compassionate thing to do for people with serious illnesses whose symptoms can be lessened with marijuana use.

Opponents say it's just going to open the door for abuse.