Florida House Speaker Richard Corcoran is praising the state’s Supreme Court after it formally barred retired judges from weighing in on cases after new justices are appointed. 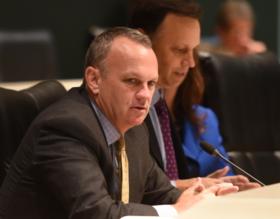 Justice Perry had been filling in until a new justice was named. After Lawson’s appointment, Perry continued working on cases he had heard arguments for but Lawson had not. The new policy says retired judges won’t be assigned or continue in an assignment when all seven justices are available.

“The language that you’re talking about that they came out with today says simply this, is that once seven justices are appointed on the bench, then you cannot have a senior judge unless there’s incapacitation. And I think that’s a good rule,” Corcoran said. “And I think that the court did an excellent job of taking the lead and initiative to make the system better.”

Corcoran criticized Perry’s participation in cases after Alan Lawson was appointed to the court. Corcoran says it violated Florida’s Constitution. But the Constitution gives the chief justice the ability to assign retired justices to cases to temporarily fill vacancies on the court.

A bill aimed at clearing up confusion around redistricting court cases is ready for a vote on the Senate floor. But there are still concerns the plan challenges the independence of the judiciary.

Florida Supreme Court justices are considering allowing hundreds of thousands of ex-felons to vote. They heard arguments from Floridians For a Fair Democracy on a ballot initiative that would restore voting rights for residents who have completed their sentences.

Florida’s political and corporate elite are nervously anticipating Monday, when  House Speaker Richard Corcoran has promised to name his picks to the Constitution Revision Commission.