Floridians are flocking to stores to stock up ahead of Hurricane Irma. Some locations are struggling to keep supplies on the shelves. 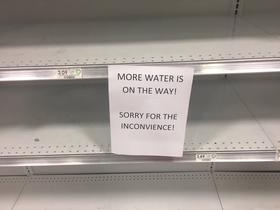 Floridians seem to be taking Hurricane Irma seriously. Residents from Miami to Palm Beach to Tallahassee are buying out whole shelves of bottled water as soon as they’re restocked. The demand is spurring some stores to redirect their supply chains in order to keep up with hurricane preparations. Angela Williams manages a Lowe’s hardware store in Tallahassee, where she’s expecting truckloads of extra supplies from North Carolina.

“Our Lowe’s emergency command center in North Carolina is working to ship critically needed supplies to Florida. They’ve actually already shipped more than 400 truckloads of product to Florida since Monday in preparation for the storm,” Williams said. “They’re going to continue to expedite shipments so that our customers can properly prepare.”

At the time of publishing, Publix had not responded to repeated requests for information on how it will keep pace with residents' needs. The grocery store chain is headquartered in Lakeland, Florida.

Demand for water, tarps, batteries, gas cannisters, plywood and generators is expected to grow as Irma approaches, and as South Florida residents evacuate north ahead of the storm.

As of Tuesday afternoon, Monroe County has declared a mandatory evacuation order for all residents and all visitors. Non-residents are ordered to leave the Keys beginning Wednesday September 6th at 7 am, while residents have until 7 pm that day.

According to the Miami Herald, Miami-Dade County is also considering evacuation orders, beginning as soon as Wednesday.

According to NOAA's National Hurricane Center, Hurricane Irma is now a category 5 storm with maximum sustained winds of 185 miles per hour. The agency calls Irma a potentially catastrophic storm that "will bring life-threatening wind, storm surge and rainfall hazards" to parts of the Caribbean. NOAA says the chance of direct impact to Florida is growing as Irma approaches, but it's too early to reliably predict the timing and intensity of the storm's effects on the state.

Florida rushed to prepare for a possible direct hit on the Miami area by the Category 5 storm with potentially catastrophic 185 mph winds.

Gov. Rick Scott warned Floridians on Tuesday that powerful Hurricane Irma will start impacting the state by the end of the week — it's just not clear where.

Closures, Cancellations And Sandbag Locations From Wednesday Ahead Of Hurricane Irma

Hurricane Irma's projected path is still not clear, but state leaders are urging Floridians to prepare for the worst.

Some events around the Tampa Bay area have already been cancelled and county leaders are providing sandbags for residents who want them.

Here's a list of closings and other need-to-know information as Hurricane Irma approaches:

Hurricane Irma's looming arrival is already preventing the Miami Dolphins and Florida International from hosting their respective home openers this weekend, with more changes almost certain to happen in the coming days.

The Dolphins were scheduled to host to Tampa Bay on Sunday afternoon; FIU was to host Alcorn State on Saturday night. Officials decided on Tuesday that neither of those games will be played in South Florida, though they may be played elsewhere this weekend.