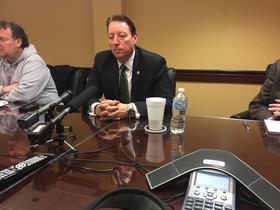 Galvano reflected on what he calls one of the most “vigorous” election cycles he’s ever experienced. After more than a week of constant news about recounts, allegations of election fraud and a host of problems counting votes – Galvano says the process needs another look.

“I think we’ve had too many problems through too many cycles. It’s something I’m interested in doing, taking a look at how we are working the process,” Galvano said. “And if there are modifications we can make to better serve the people during our election cycle.”

Seemingly no one was louder in raising election fraud questions than the state’s governor for the past eight years, Republican Rick Scott. Asked if Scott and President Donald Trump’s rhetoric concerning fraudulent activity tarnished voters’ confidence, Galvano had this to say:

“I’m not sure that there was a lot of confidence going in. We’ve sort of been painted with that brush since 2000 I think they definitely highlight that we have concerns, and then you see repeat problems in the South Florida counties. And I think by next election cycle, the voters are going to want to have more in terms of assurance that their votes are going to be properly counted.”

And, on the subject of extending certain deadlines in the process to ensure accuracy of the count, Galvano says no matter what comes of that, he would rather not have to see judges imposing changes.

“If we take a look at the whole process, you’d have to look at that aspect as well. We now have an extension because a federal court has extended the time,” Galvano said. “And I would rather have a system with efficacy that doesn’t require judicial intervention.”

The Senatorial race, which is undergoing a hand recount, isn’t yet decided. But with a Republican Governor-Elect Ron DeSantis looking to be a certainty, Galvano detailed his most recent meeting with DeSantis in Tallahassee.

“The governor-elect and I have had a few visits, in fact I spent some time with him yesterday, while we can still get under the wire and spend some time together. And I find him to be very eager to understand and be part of the legislative- or the state of Florida process- and to acclimate himself with the legislative process and how we work in the Senate,” Galvano said. “And we haven’t dug into specific agendas and done a match-up of who wants to do what, and where, and what the success of it is. But if the level of communication that we have presently is an indicator of his willingness to work with both the speaker-designate, myself and our members, I feel pretty good about it.”

DeSantis resigned from his post as a U.S. Congressman during the gubernatorial race. But Galvano sounded confident in DeSantis’ ability to learn the inner-workings of Florida’s House and Senate.

“I do, I think there’s a big difference between what we do here in Tallahassee versus what they do in Washington, and for the most part that’s a good difference on our side of the equation,” Galvano said. “He’s very fortunate to have lieutenant governor-elect Jeanette Nunez, who’s been through this process and has relationships, but knows the nuts and bolts of it, mechanics, and just comes out of a leadership position in the House. I’m confident he will get his footing as we go, but there are some things that I think he will have to discover.”

The 2019 Legislative Session will begin March 5.

Incoming Senate President: 'I Stand By' The Decision To Keep Funds In The Guardian Program

This comes after Governor Rick Scott asked the Legislature to move the remaining funds to school districts so they can hire more officers.

As students across Florida start the new school year, incoming Senate President Bill Galvano wants lawmakers to think about expanding the school-safety efforts approved during the 2018 legislative session after the massacre at Marjory Stoneman Douglas High School in Parkland.

Sen. Bill Galvano was designated as the next president of the Florida Senate on Tuesday with a unanimous vote by the Republican caucus.

Galvano, R-Bradenton, will succeed Senate President Joe Negron, R-Stuart, after the 2018 general election if Republicans maintain a majority in the Senate, where they now hold a 24-16 seat edge.