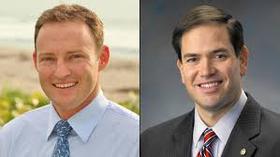 Republican Senator Marco Rubio has been leading in Florida’s U.S. Senate race, but new polls show the race may now be too close to call.

Just a few weeks ago a poll from the University of North Florida showed Democratic Congressman Patrick Murphy struggling with name recognition. Michael Binder over saw the poll.

“21 percent of the folks had indicated they’d never heard of Patrick Murphy and 15 percent of didn’t really know whether they had a favorable or unfavorable opinion of him. That’s a really big number a month out from a Senate race,” Binder said.

Perhaps some of that stems in part from Murphy’s comparatively small ad presence in Florida. A report from Politico shows Murphy as spent about $4.2 million of his campaign dollars on ads while groups supporting him have shelled out $5.8 million. That’s compared with, Republican candidate, Senator Marco Rubio who has spent $9 million from his campaign on ads while groups supporting him have spent $18 million. But the tides may be turning for Murphy. A Quinnipiac poll shows Murphy and Rubio neck and neck. And Pollster Peter Brown says the race is too close to call.

“Republican U.S. Senator Marco Rubio is getting 49-percent of the vote compared to 47-percent for his challenger congressman Patrick Murphy. The two-point margin is much smaller than the margin of error so this is actually a statistical tie,” Brown said.

And since then Murphy’s campaign has been making strides. President Barack Obama took some time out of a campaign stop stumping for Hillary Clinton in Florida to praise Murphy. And Murphy has released a new ad attempting to tie Rubio to negative comments about women made by Republican presidential candidate Donald Trump.

And Murphy drilled Rubio over that issue during a recent debate between the two Senate candidates. After the release of video in which Trump is heard bragging about groping women, a trove of Republicans quickly distanced themselves from the party’s presidential nominee—with some rescinding endorsements. But as Murphy points out, Rubio has said he disagrees with Trump, but will still vote for him.

“You see there’s been 16 U.S. Senators that had the courage and the internal fortitude to not only disavow Donald Trump, but unendorsed him. But you doubled down on your endorsement of him. So, where’s the courage? It proves to all of us that you’re going to continue to put your own ambition in front of what’s best for Florida,” Murphy said.

But Rubio pushed back, saying the presidential candidate Murphy supports, isn’t flawless either.

“You are going to need people in the United States Senate willing to stand up to the next president of the United States when they are wrong on policy or when they are wrong on their behavior. And I’m the only one that will. I have repeatedly done so when it comes to the nominee of my party. Congressman Murphy has not once broken with the nominee of his party. When she has been caught doing all these things he has not once condemned her, not once pointed a finger at her, not once broken with her on any of her behaviors or quite frankly any of her polices,” Rubio said.

The debate also touched on the candidate’s voting and attendance records as well as their stances on the environment and water issues.

He also took aim at new U.S. regulations. Those include government approval of new cigar blends and requiring larger warning labels on cigar boxes. Rubio says that's something the Cubans won't have to do.

After a campaign that seemingly has lasted years, the two main candidates for U.S. Senate finally met for a debate. Monday night's match in Orlando between incumbent Republican Marco Rubio and Democratic challenger Patrick Murphy revolved around a lot of allegations - and mostly about how little each other has accomplished while in office.

Rubio leads by a margin of 49 percent to 47 percent in the Quinnipiac University poll, which was conducted before the candidates battled in a televised debate Monday night. The two-point difference is within the poll's margin of error.