Despite its moniker, the “Sunshine State” Florida is not using its solar energy opportunities as much as one might expect.

Florida’s 400 megawatts of solar energy last year pales in comparison to California’s 18,000 and so do the Sunshine State’s 8,200 solar industry jobs when compared to California, which boasts more than 100,000 solar-related jobs.

With Florida making the short list of most populated states alongside California, clean energy proponents, as well as Florida Power and Light, hope to catch up to solar states. FPL spokesperson Alys Daly recently talked about the state’s current solar situation on WGCU’s Gulf Coast Live.

“Right now, our solar is in line with the country’s, which is about 1 percent,” Daly said. “That’s not including the last three plants that we built over on the west coast of Florida, and that’s not including the eight new plants that we’re developing. While the national average is about 1 percent for solar, the rest of their generation is made up of much more oil and coal where ours is clean, natural gas and nuclear.”

FPL has 11 active solar sites. It plans to bring another three online by 2018 and eight more in the future.

Industry experts attribute FPL’s current ability to expand the state’s solar industry to the sharply declining price of solar energy over the years.

Twenty-five years ago, solar energy cost $90 dollars per watt. Now, the price has dropped to $3, and Americans can afford to invest in solar, though Daly says it’s more cost effective to wait on FPL’s expansion rather than invest in personal roof units. 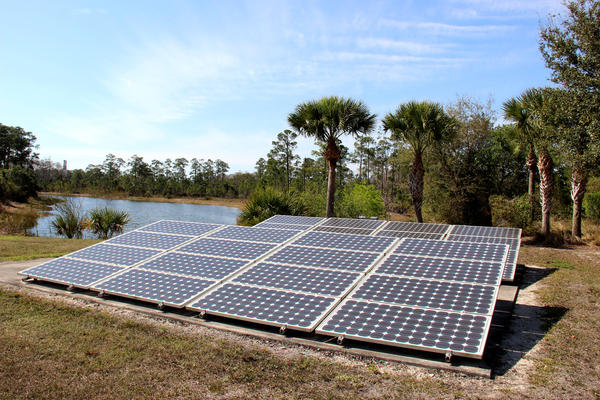 Sarasota residents who want to try out solar energy are getting a chance to save money on rooftop panels. A new solar co-op launched in the county Wednesday morning.

New Solar Plants Will Pay For Themselves, FPL Says

Florida Power and Light announced Monday that it plans to build eight solar generators by early 2018. The plants will increase the company's solar capacity to nearly 1000 megawatts.