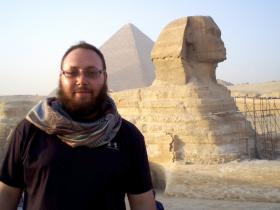 Federal officials have confirmed the authenticity of a video that shows journalist Steven Sotloff being murdered by an ISIS (Islamic State of Iraq and Syria) militant.

The video appears two weeks after the recorded beheading of American photojournalist James Foley. In that video, an ISIS militant showed Sotloff and said they would execute him too if President Obama didn’t stop targeting the group.

Sotloff’s family lives in South Florida. Outside their home in Pinecrest, the family’s spokesperson said family members are aware of the video.

From the Miami Herald:

“The family knows of this horrific tragedy and is grieving privately,” said spokesman Barak Barfi in a statement issued as about 40 journalists gathered around the Sotloff home in a gated Pinecrest neighborhood. “There will be no public comment from the family during this difficult time.”

In a previous story we wrote that Sotloff attended the University of Central Florida from 2002 to 2004 and contributed to media outlets Time magazine and the Christian Science Monitor.

Last week, his mother Shirley Sotloff sent a video message to ISIS leader Abu Bakr al-Baghdadi. In her message, she pleaded for her son's life and reminded the group of Muslim teachings about peace.

In the wake of the newest video, Florida officials shared their condolences with the Sotloff family and condemned the group.

“Here is what they need to understand – Steve Sotloff was a Floridian, but more importantly he was an American. If you attack one American, you are attacking all Americans,” Scott said in a press release. “Last week President Obama said that his administration does not at present have a strategy for dealing with ISIS – these immoral evil people.”

The time for a strategy is now, and part of that strategy needs to include destroying them. http://t.co/UrWUpxKA2D (5/5)— Rick Scott (@FLGovScott) September 2, 2014

U.S. Senator Bill Nelson made similar comments in his statement. “Let there be no doubt, we must go after ISIS right away because the U.S. is the only one that can put together a coalition to stop this group that’s intent on barbaric cruelty.”

“Yet again the Islamic State has proved it is a depraved group of brutal extremists who have no respect for human life, international norms or human decency,” she said in a statement. “As the President has said, we will be vigilant and relentless in pursuing justice against those who harm Americans and innocent people.”

The extremist group, which has claimed wide swaths of territory across Syria and Iraq and declared itself a caliphate, said Sotloff’s killing was retribution for continued U.S. airstrikes targeting its fighters in Iraq. It brazenly killed American journalist James Foley last month in the same manner and again threatened to kill another hostage, this one they identified as a British citizen.

It’s been a year since American journalist Steven Sotloff was kidnapped by terrorists in Syria. In that time, Sotloff’s family here in Pinecrest has not spoken publicly. But that changed Wednesday with a plea from Sotloff’s mother.

The short but moving video message from Shirley Sotloff is addressed to Abu Bakr al-Baghdadi. He’s the leader of the extremist Islamic State of Iraq and Syria – or ISIS – which has threatened to kill her son if the United States continues bombing ISIS targets.

Now that U.S. officials have verified the beheading of U.S. photojournalist James Foley by the terrorist group ISIS (Islamic State of Iraq and Syria), attention has turned to another American journalist being held by the group.