Florida Not Off The Table Under Proposed Federal Offshore Drilling Plan 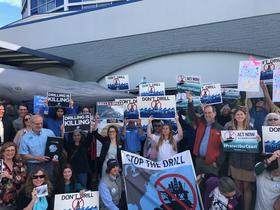 A decision to exempt Florida from a federal plan opening more waters to oil and gas exploration is not final.  Supporters and opponents were out Thursday for the federal government’s first and only public Florida hearing on its proposed five-year plan.

Confusion arose in January when, after a brief meeting, both U.S. Interior Secretary Ryan Zinke and Florida Governor Scott said Florida would be off the table. That was contradicted shortly after by the Bureau of Ocean Energy Management, which held its first and only public Florida hearing Thursday in Tallahassee. The meeting drew scores of environmentalists, like the Southern Alliance for Clean Energy’s Susan Glickman.

“As been said before, we’re in a tourism-based economy. It would crush us, and those of us who lived through the 2010 Deepwater Horizon saw what it did to our communities.”

That 2010 oil spill was the worst in U.S. History. The hearing also drew support from groups who want to see the process play out. Yet there is a point of agreement: neither side fully believes Florida is off-the-table for offshore energy exploration.

“If you’re right, then why are the environmentalists here?" says lobbyist Barney Bishop. "Why are they raising hell about this issue if ‘no’ is ‘no’. Because you know what? No is never no. Ya’ll don’t know about the discussions being held in private. ‘No’ publicly can mean a whole lot of things in private.”

The BOEM says it will hosts other forums throughout the comment period in state capitols. Regional Director Mark Celata says the agency could make a decision on Florida later this year.

“The Trump Administration is playing games with Florida’s coast.”

That was the warning from Jennifer Rubiello, state director of environmental advocacy group, Environment Florida. She was speaking at a press conference Thursday that discussed Florida’s status when it comes to offshore oil drilling.

Florida’s offshore drilling concerns have made headlines recently. And now, nearly 80 years into the industry’s existence in Florida, state government officials are searching for some permanency on the issue.

If Florida’s Offshore Oil Rush Ever Happens, Only One Side Of The State Is Likely To See It

The offshore drilling rigs that pepper the central Gulf of Mexico off Louisiana and Texas tap some of the nation’s richest oil and natural gas reserves.

That proven and profitable productivity is why the energy industry has pushed for decades to open vast Gulf waters off Florida’s West Coast to exploration and drilling.

Opposition to the Trump administration's plan to expand offshore drilling mounted Wednesday as Democrats from coastal states accused President Donald Trump of punishing states with Democratic leaders and a second Republican governor asked to withdraw his state from the plan.

The Trump administration says it plans to open most U.S. waters to offshore oil drilling, and that’s raising bipartisan hackles in Florida.