The Florida Association of Counties sees dozens of pieces of legislation every year that limit home rule. That’s when local governments can make its own laws. But Cragin Mosteller of the association calls this year “an assault” on the idea of local control by House Speaker Richard Corcoran.

“I think what was different this year was you had the leader in the House be the driver to strip home rule from local communities and bring it up to the state,” she said.

The legislature has approved an additional $25,000 homestead exemption for the 2018 ballot. If 60 percent of voters approve the constitutional amendment, it would take effect in 2019 and cost local governments more than $600 million. Mosteller argues it’s a tax shift not a tax cut.

“The majority of homeowners won’t even see the benefits from this additional exemption, which on average is about 200 dollars per homeowner per year," she said. "And so, unfortunately, it’s a small benefit to a few homeowners and a pretty big hit to your local community and the services they provide.” 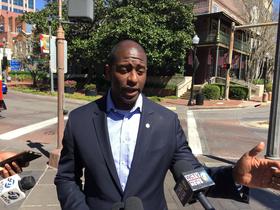 Tallahassee Mayor Andrew Gillum said the homestead exemption could mean the city provides less services. The gubernatorial candidate said it could hurt funding to the police department or to parks.

“That is all the essential services that allow people to call Tallahassee home and feel proud about the kind of community we’ve built here," he said. "Which is why these are decisions that are best left to local governments.”

“So, let’s not go too far again," he said. "We’ve already learned our lesson. We have to vote no on this bill. We went too far one time and this is going too far again.”

Both the House and Senate bills grandfather regulations passed by localities before 2011. But, some senators favor allowing cities and counties to regulate vacation rentals if two-thirds of voters approve it as a referendum. The Florida League of Cities supports local control of vacation rentals.

Mosteller said it helped kill legislation that would have prevented local governments from passing business regulations.

“We were thankful to see that it did not get a companion in the Senate and we’re certainly hopeful that this is a concept that will die,” she said.

A push moving the creation of Community Redevelopment Agencies from local governments to the state legislature also appears unlikely to make through both chambers. The Senate bill died in committee.

Florida mayors came to the Capitol this week to circle the wagons.