Florida Governor Rick Scott and President Donald Trump are political allies. But Scott is refusing to say what his position is on the president’s travel ban.

Trump is temporarily halting travel from seven Muslim-majority countries. The order also temporarily restricts entry for all refugees and brought an indefinite halt to the Syrian refugee resettlement program. 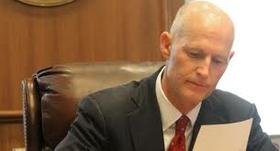 “I just saw a number that about a third of the people that moved here last year to Florida moved from another country," he said. "I mean, it’s remarkable, how many people moving here. So, we’ve got to do this right, but we know the system we have today is not working.”

House Minority Leader Janet Cruz, D-Tampa, said her caucus will stand against any discriminatory legislation. She said the order creates a hostile environment for new residents, immigrants, and tourists, who are the backbone of the state’s economy.

“We don’t have a state income tax," she said. "We rely on sales tax and a big portion of that sales tax collection is collected from tourists. So I think we should think twice before we discourage any kind of tourism in our state.” 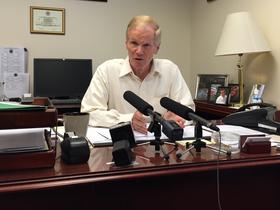 Top Republicans, such as Scott, are defending or avoiding directly giving their position on the executive order. Scott is widely expected to challenge Democratic Senator Bill Nelson for his seat next year. Agriculture Commissioner Adam Putnam, considered a contender for governor, said the state should be a welcoming destination for people from around the world. Muslim civil rights activists say no one from the seven countries included in the ban have committed a terrorist act in the U-S since the mid-1970's. The 2016 Orlando shooter was a U.S. citizen. And one of 2015 San Bernardino attackers was from Pakistan, a country not covered in the ban.

Tampa Man Is Plaintiff in Lawsuit Against Trump Immigration Order

Two of the 27 plaintiffs in a lawsuit against President Trump's executive order temporarily banning some immigrants from coming to the United States are from Florida.

A Capital City immigration law attorney is recommending refugees affected by President Donald Trump’s travel ban stay in the U.S., if they can. She also has a warning for people who came to the U.S. from other countries.

The Council on American-Islamic Relations is suing President Donald Trump over his travel ban. The ban restricts refugees and travelers from certain Muslim-majority countries.

Protests continued on Sunday in the Tampa Bay area and across the U.S. after President Donald Trump’s executive order temporarily barring citizens from seven largely Muslim countries, as well as all refugees, from entering the country.

That order was blocked in part by a federal judge.