In the days leading up to Hurricane Michael’s landfall, Gov. Rick Scott did what any Florida governor would do: warn people. After the storm passed, Scott shifted from warnings to gravitas.

But his appearances were more significant than previous storm responses (Michael is the fourth hurricane Scott has had to respond to in his eight years as governor).

With elections just under three weeks away in Florida, candidates – especially those for governor and U.S. Senate – know that voters could cast their ballots based on how candidates responded to the storm.

The day before Hurricane Michael approached the Panhandle, Scott, who is running for U.S. Senate, got more than 5,800 mentions on TV, according to Politico.

That was ten times more than his opponent, Democratic incumbent Sen. Bill Nelson; Nelson tried to keep up, making appearances on CNN and PBS NewsHour. 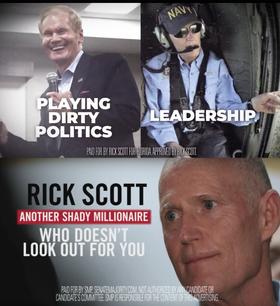 According to Politico, super PACs that backed both Scott and Nelson ran negative campaign ads in areas that were bracing for Michael.

Scott got the better bargain, says columnist Diane Roberts, who wrote a piece about the politics of hurricanes for the Washington Post.

“He got the free media because he is the governor of the state,” she said. “It’s cheaper than buying a campaign ad.”

Tallahassee mayor Andrew Gillum, the Democratic candidate for governor, benefited from free media, too. He was seen across the news filling sandbags in the days before the hurricane.

And while Hurricane Michael was barreling toward the Panhandle, the Republican Party ran an ad criticizing Gillum’s response to Hurricane Hermine in 2016.

“My opponent has decided to leave all his negative advertising up, all the way across the Panhandle, including right here where we are preparing our citizens for a Category 4 hurricane impact,” Gillum said on MSNBC. “I again would encourage my opponent to subside with the politics.”

Gillum’s campaign later responded with its own ad.

At an event in Tampa, reporters asked DeSantis about the Republican Party’s ad.

Meredith Beatrice, a Republican Party spokeswoman, tweeted thay the party had ordered the ads taken down in places affected by the storm.

As we stated earlier today, the order to take the ads down in the affected areas was made. Any statement to the contrary is simply wrong. https://t.co/qPsPcYn3kx— Meredith Beatrice (@MeredithMBeat) October 10, 2018

Races for governor and U.S. Senate were both supposed to have debates this week. They were canceled to focus on hurricane recovery efforts.

Scott's wife Ann will stump in his place over the next few weeks. It’s unclear if he’ll be seen at any campaign events before the Nov. 6 election.

On Tuesday, Scott’s campaign tweeted a new ad, which attacks Nelson while praising the Republican's leadership in the aftermath of Michael. The ad was released a day after Scott said he'd be taking a break from campaigning.

Starting next week, Florida will officially kick off early voting for the 2018 general election. Starting dates may differ but many Tampa Bay area counties will open locations on Monday, Oct. 22.

Though one justice wrote that voters should “beware,” the Florida Supreme Court on Wednesday rejected a challenge to three proposed constitutional amendments on the November ballot --- including a measure that seeks to ban offshore oil drilling and vaping in workplaces.

Justices overturned a ruling by Leon County Circuit Judge Karen Gievers that would have blocked the constitutional amendments in a case focused on whether the proposals improperly “bundled” unrelated issues into single ballot measures.

Hillsborough Candidates Speak With Muslim Community Ahead of November Election

The Muslim community in the Tampa Bay area is one of the largest in the state, and local politicians got the opportunity to make their pitches to them on Saturday.