The Florida House has overwhelmingly approved a ban against sanctuary policies. President Trump’s disparaging comments about Haiti, El Salvador and African countries fueled an already contentious debate on the bill. Trump reportedly referred to the areas as "s***hole countries." 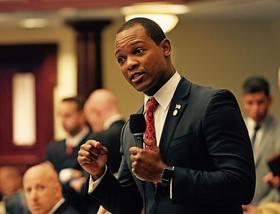 “Let’s talk about the rule of law. What we’re proposing to do today has already been determined to be against our constitution!” Jacquet said.

A federal judge struck down portions of a similar law in Texas after cities sued.

Jacquet's parents are from Haiti and he spent part of his childhood there. He spoke at length against the bill, speaking in both English and Haitian Creole.

Hispanic lawmakers and community organizations vocally opposed the measure, as they have in past years. But after President Trump ridiculed immigrants from Haiti, El Salvador and African countries, Florida democrats railed against the bill which they say reflects Trump’s policies. And they accused Republicans of capitalizing on the conflict to fuel campaigns for higher office. Bill sponsor Larry Metz, a Groveland Republican, denies this.

“Are we really trying to just serve up red meat in an election year? Or perhaps the bill is intended to help people to run for higher office? It’s just chest-thumping? I want you to know the genesis of this bill has nothing to do with that,” Metz said.

Metz says he wrote the bill after an undocumented immigrant fatally shot a woman in San Francisco. But with an election year coming up fast, priorities and motivations will likely change for some lawmakers. Three House members are running for attorney general, and Speaker Richard Corcoran is expected to run for governor. He recently released a campaign-style ad outlining his support for House Bill 9.

Meanwhile, the measure faces an uphill battle in the Senate: it hasn't had a single hearing yet.

The mayors of Tampa, St. Petersburg and Clearwater laid out their priorities for 2018 at the State of the Bay discussion on Friday.

If one Florida lawmaker gets his way, legislators will once again be debating sanctuary cities. Republican Representative Larry Metz of Groveland is filing legislation he hopes will ensure local law enforcement are cooperating with federal immigration authorities.