The main goal of these gatherings is to identify measures that can be taken before the end of the legislative session to improve safety in schools, gun control and resources for mental health. The last day of the session is March 9.

"It’s the governor’s intent to take this and actually do something," said Mike Carroll, the head of Florida's Department of Children and Families. "We have to stop talking about it and start taking some action around these issues." 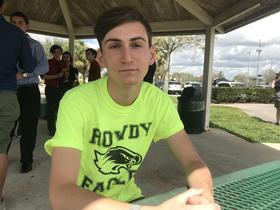 Carroll led the mental health and child welfare workshop, in which experts noted that schools are the most likely place for young adults to get consistent access to mental health care.

Among law enforcement officers, a main concern is that they can’t legally take weapons away from people who talk or post online about committing violence, like the alleged Parkland shooter did. Several sheriffs said more needs to be done to limit access to guns among people who have been taken into protective custody for mental health issues under the state's Baker Act.

Pinellas County Sheriff Bob Gualtieri was among those who said current background checks aren't stringent enough. "It’s, 'do you have a disqualifying crime and has a judge... adjudicated you mentally incompetent?' That's all that's done."

"We need to be real about it: It's not a background check," he said.

Other law enforcement leaders bluntly described the need to increase funding to expand the number of school-resource officers, along with revamping how emergency drills are conducted.

Polk County Sheriff Grady Judd talked of expanding his “Sentinel Program,” which enables authorized and trained employees at the private Southeastern University in Lakeland to carry concealed firearms to respond to assailants on campus as the last step.

“It’s much better that, if there’s going to be a gun on campus, that it is with a trained person to stop the shooter," Judd said. "The only thing worse than having a shootout on a campus is not being able to stop a shooter on campus.”

Coconut Creek Police Chief Butch Arenal said not every district may be open to the idea of arming educational staff, but people are clamoring for improved school safety immediately.

“The public, I feel personally, is not going to tolerate anything less than security for their school now. I’m not talking long-term solutions, or legislative solutions, but tomorrow."

Ideas from the workshops were to be shared with Gov. Rick Scott on Tuesday evening. Public comments on how to improve student safety are being accepted online through the Florida Department of Education.

After a major tragedy like the Marjory Stoneman Douglas High School shooting, people offer condolences with the pledge to keep victims in their “thoughts and prayers.” But many have become disillusioned by the phrase.

The deadly shooting happened on Ash Wednesday, a day of repentance for many within the Catholic and Protestant Christian traditions. Religious leaders in South Florida say faith communities can offer more besides prayers.

A group of law enforcement officials from across the state is looking into putting prevention methods in place to avoid another mass school shooting.

Educators from across Florida are aiming to make schools safer in the wake of last week’s Parkland shooting. The Florida Department of Education hosted a roundtable Thursday to prevent future school massacres.

Miami-Dade County’s school system wants an extra $30 million this year from Florida to better prepare classrooms for a mass-shooting era — with bulletproof glass, advanced monitoring of social media and social workers trying to spot troubled students before they erupt in violence.