Florida Farmers Are Hurting, And Not Just From Hurricane Irma

Automation. Development. Citrus Greening. Florida’s agriculture industry is hurting, and Hurricane Irma is only the most recent blow. During this year's legislative session, lawmakers will be considering how to support the industry, which is second only to tourism. 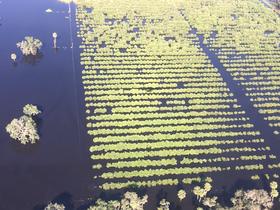 According to the U.S. Department of Agriculture, the average age of a farmer is 58 and rising. Ken Griner is with the Usher Land and Timber Company.

“200 years ago, 250 years ago, 90% of the population was involved in farming, agriculture. Today there’s 300 million people and less than 2% understand what it is,” Griner said.

And younger generations are not keeping up, says Chloe Gentry of IMG Enterprises. That's a citrus, nursery and land management company.

“Right now where we feel the most pressure is on the labor. There is a very large shortage of the labor supply. It’s accentuated by the fact that the construction industry is on a high. So a lot of our field labor and nursery is also compatible with construction,” Gentry said.

She says her farm's relatively higher wages aren't keeping employees on the field.

“Every day we lose people who prefer to go flip burgers for $8.50 over a career growth opportunity at our farm, for $12-13 an hour,” she said.

She says agriculture is losing its attraction.

“I think it’s partly because of the stigma that there exists, that people don’t understand the career growth and the monetary potential and the opportunity that exists in agriculture. There’s a loss of pride in what agriculture can be for a community, for a person, for a family,” Gentry said.

The losses farmers suffer from pests and the catastrophic disease citrus greening are sending ripples throughout the state, according to Ellis Hunt, chair of the Florida Citrus Commission.

“45,000 jobs plus are related directly to the citrus industry, so its way beyond us. It’s all of our employees," he said. “All of these little towns, Frostproof and Fort Meade and Wauchula up and down the state, and in the center of the state away from the beaches and tourism, ag is huge!”

This year’s citrus crop in particular was supposed to be the largest in years, finally a crop to be proud of as state Agriculture Commissioner Adam Putnam put it. Then Hurricane Irma hit. Putnam says the storm couldn’t have been more lethal for the industry.

“When you start with the working waterfronts, the lobstermen, the stone crab boats in the Keys. Then coming in to South Dade, the tropical fruits, avocado, landscape and nursery industry," he said. "Then running up the center of the state, through sugar, vegetables, citrus, timber, beef and dairy industries...”

Florida’s ag industry took an estimated $2.5 billion hit, including crops, equipment, greenhouses and other facilities. Many farm laborers are paid by how much they pick. They may see a significant cut in wages, with produce shipments down 74% compared to last October.

“I actually think your numbers are conservative. I think you’re looking at $1 billion dollars-worth of damage to the citrus industry,” Moskowitz said.

Moskowitz's Republican colleague and citrus grower Ben Albritton of Wauchula wants to cut state and local taxes for Florida farmers. Some members of the agriculture industry themselves are asking for more funding for the conservation land programs Florida Forever and Rural and Family Lands, which could preserve farmlands from development.

Moskowitz and Albritton are also calling for a federal disaster relief package. Friday afternoon the White House released a $44 billion dollar plan, meant to cover Florida, Texas and Puerto Rico. That amount falls far short of the $182 billion the states and territory collectively requested, and leaves out relief for Florida's citrus growers.

Commissioner Putnam says he's disappointed the White House is leaving out the aid for the state's signature crop. But he's confident Florida's members of congress will change that as the plan moves forward.

Florida's $2.5 billion request for federal disaster relief for its agriculture industry after Hurricane Irma might not be enough.

The U.S. Department of Agriculture is predicting this year’s Florida citrus crop will be the smallest since the 1940s. The state is slated to produce 54 million boxes, down from nearly 300 million in the 2000s.

Hurricane Irma caused more than $2.5 billion in damage to Florida's agriculture industry, with citrus growers and nurseries suffering big losses, according to a preliminary report released Wednesday by the state Department of Agriculture and Consumer Services.