In a full scale activation, all primary and support agencies under the state plan are notified. The State Emergency Operations Center will be staffed by Division of Emergency Management personnel and all Emergency Support Functions.

Reporters are working in a much smaller room next door, separated by large windows. They can see the action, but can’t enter the operations room. 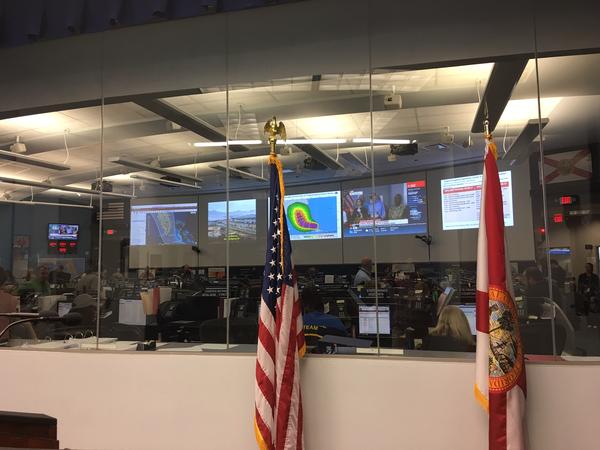 Occasionally, someone from the Governor’s Office or emergency management stops in the media room to say hello. They’re being careful about the messages going out — Gov. Rick Scott is the main person providing storm information to the masses via regularly scheduled news conferences around the state.

They expect things to get much more urgent and hectic by Friday night. And even though the evacuation continues, they’re urging travelers to quickly find a shelter in a nearby town instead of trying to reach points far away.

WLRN spoke briefly with Governor Scott over the phone during the noon hour. He says 17,000 volunteers have signed up to help statewide, and even more are needed.

WLRN: Tallahassee is so far away from Miami. What can you tell (people in South Florida) about what is being done in Tallahassee to get ready for this storm and to help them?

SCOTT: The state emergency operations center is being staffed 24 hours a day. We have people from every state agency there. We've got law enforcement, utilities. We've got FEMA — so all the resources for the preparation and the recovery and the response. All of them are sitting right there, and they are there to help everybody in the state. A lot of them have family members from Miami. And they're very focused on the safety of every Floridian in Miami and every Floridian across the state.

WLRN: There are big concerns about the power grid and how we could even be looking at months of trying to rebuild a power grid down south. Have you talked to anyone about that?

SCOTT: Absolutely. Every day we have calls with all the utilities. We're doing everything we can to make sure that we provide whatever resources they need. They are bringing in talent from around the country to help them. They’re pre-positioning crews and equipment around the state and outside the state so we can respond and solve any needs they have.

WLRN: We know there are a lot of people in Miami who could not afford to prep for the storm — they literally couldn't get out. There was nothing they could do. Are you prepared for what could be a significantly large homeless population down there after the storm?

SCOTT: I went through Hurricane Andrew back in 1992. At that point, I ran a large hospital company. I had two hospitals completely evacuated, one demolished by the hurricane. I had over 500 employees without homes. And I've gone through this effort to try to make sure we get people's lives back. We will do everything we can to help people evacuate. We've got a state emergency hotline that you can call in to. We have volunteers from around the state. We're going to do everything we can to help you get your life back to normal as quickly as possible.

Irma Closes In With Tampa, Not Miami, In The Crosshairs

Hurricane Irma's leading edges whipped palm trees and kicked up the surf as the storm spun toward Florida with 120 mph winds Saturday on a projected new track that could put Tampa — not Miami — in the crosshairs.

Tampa has not taken a direct hit from a major hurricane in nearly a century.

Shelters, Evacuation Zones And Closures From Saturday Ahead Of Hurricane Irma

Hurricane Irma's projected path is moving west and state leaders are urging Floridians to prepare for the worst.

Evacuation orders have been issued and shelters are open.

Here's a list of shelters, evacuation zones and other need-to-know information as Hurricane Irma approaches:

As Hurricane Irma approaches, authorities are encouraging residents to know whether they live in an evacuation zone, so they know when it’s time to leave.