As Tropical Storm Emily made landfall Monday, two Florida Congressmen got a lesson in how water is managed in Collier County. Their visit came after they helped secure millions of dollars for Everglades restoration.

They came to talk about Everglades restoration and financing for it. That means replumbing the "River of Grass" with equipment like this pump station which was just completed last month.

The tropical storm's presence is a coincidence, but is a good illustration for what a pump station does. The 5 to 7 inches of rain that fell that day had to go somewhere. 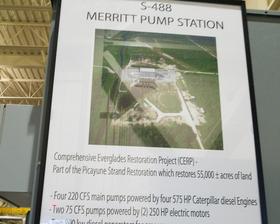 After that, a more manageable water flow is dispersed back into the environment. This particular pump station is also responsible for hydrating the Picayune Strand--a western part of the Everglades with cypress trees, pinelands and marshes. It's home to Florida panthers and black bears.

The congressmen watch as Starnes points out how the water is redistributed. Rooney represents Florida's 19th congressional district, which stretches from Fort Myers to Marco Island.

"This is an important story: the work nature will do if we just set the conditions for nature to do its work," he said.

Diaz-Balart, who represents Florida's 25th congressional district--which includes a portion of Miami and a portion of the Everglades, said "that's right" in agreement.

Politico reported in 2016 that the estimated cost of Everglades restoration soared from $13.5 billion in 2009 to $16.4 billion in 2014, according to a five-year report sent to Congress.

Starnes said it's just cheaper to be proactive.

"If we're more careful up front, as we develop areas and do it in a more sensitive manner, we can actually save that cost later," she said.

She said a lot of harm was done with lax to nonexistent permit requirements back in the day, a time when residential developers used canals to temporarily drain the swamp to sell property. Now, Starnes said, the current permitting process prevents long-term damage.

The congressmen's visit comes after securing about $100 million in federal money for Everglades restoration and $82 million for Herbert Hoover Dike rehabilitation projects around Lake Okeechobee for the next fiscal year.

Diaz-Balart said constituents often ask why it's taking so long.

"Two things: it's a lot if money and second place, you cant do it at the same time," he said. "And you get to the point where you can only do so much every year which is what we try to push for."

Diaz-Balart said he and Rooney think they got the most out of what they could expect to see from the federal government this year. Diaz-Balart said Governor Rick Scott and the Florida legislature have been instrumental in contributing state money for Lake Okeechobee's dike repairs.

"The Herbert Hoover Dike--unlike other things--that's strictly a federal project," Diaz-Balart said. "Yet, you've seen that the governor wants to see how he can be helpful."

Parts of Florida's Everglades are so waterlogged that deer, wading birds and other animals are running out of dry ground.

Things are a bit quieter at the state capital, now that the year's legislative session is over. Many bills were left on the table, as always happens, but one that made it is being cheered by numerous environmental groups.

A plan to build reservoirs south of Florida's Lake Okeechobee to treat polluted water before it flows downstream became law Tuesday as Republican Gov. Rick Scott signed that and 10 other bills.