Florida Community Colleges Ask Lawmakers Not To Cut Their Budgets

Tallahassee Community College student Jasmine Green plans to transfer to Florida State University soon. Green is able to get her degree in criminology without a lot of student loan debt because she started at a community college. 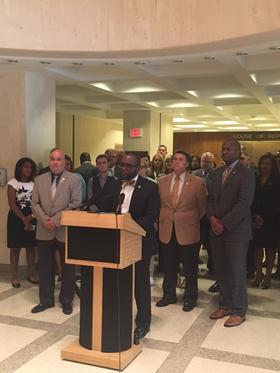 “Eleven Florida College System institutions have been placed in the top 100 colleges nationwide for the number of associate degrees awarded to minority students," he said. "And as I stand here today as one of the ranking members of the Education Committee and as a member on an Appropriation Committee, it bothers me in the direction that we are moving in the cuts of our college system.”

The Florida College System is made up of 28 member colleges. The Senate is increasing university funding while reducing community colleges funding by cutting $55 million in developmental education classes. Senate President Joe Negron gives universities an extra $312 million. Negron said he wants Florida to have universities that draw top students and faculty.

Negron said community colleges should refocus on awarding two-year degrees and he wants to curb their expansion of 4-year programs. But Sen. Gary Farmer said he thinks the Senate’s proposal is more unfair than the House version, which cuts both colleges and universities. The House is considering cutting more than $63 million from colleges. It also reduces foundation money to each college by $9.8 million annually starting next year. House lawmakers questioned college foundation spending during the committee meetings on higher education. Records released by the House Appropriations Committee show the University of Florida Foundation spent $61,000 on a trip to Paris last year. The Tallahassee Community College Foundation spent nearly $11,000 for in-state travel. Rep. Carlos Trujillo said the House cut colleges and universities that were using operational money to pay for foundation staff.

“So across the system, it’s about 80 million dollars," he said. "If you look in my presentation you can find the answers. It’ll tell you each college and each university how much they were paying per foundation staff.”

Cynthia Bioteau is President of Florida State College at Jacksonville. She said the foundations are used to match state funding with private donations.

“Our foundations provide 75 percent of what donors give goes directly to student scholarships," she said. "These kinds of budget reductions will compromise not only access, but need based aid.”

The House and Senate will present their respective spending plans them on the chamber floors next week. Negotiating on a final proposal will start later this month.

Performance funding in public higher education is a way for states to hold institutions accountable for certain outcomes. But new research shows it doesn’t do much to keep students enrolled or boost graduation rates.