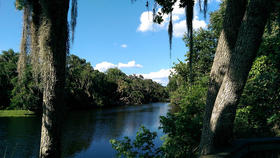 Note: Every day this week, we’ll be taking a look at amendments on the Florida ballot.

We start with Amendment 1: the measure setting aside public money for environmental conservation. Supporters of the amendment say it’s a way to accomplish what the Legislature has failed to do. But opponents say the Constitution isn’t the place to write state budgets.

Listen
Listening...
/
Hear the radio version of this story

Natural Bridge Battlefield State Park is a half-hour southeast of the Florida Capitol building. Preston Robertson, the lawyer for the nonprofit Florida Wildlife Federation, is looking across the water.

“This tract that we’re looking at, which is part of what’s called the Upper St. Marks River Corridor, has been on the Florida Forever list for a long time, I think about 10 years,” he says.

The state owns and manages the park. But north of here, the river flows through land owned by the St. Joseph Lumber Company. Purchasing that waterfront land is among the top priorities for a council that recommends land purchases under the state program Florida Forever. The Yes on 1 campaign says the land-buying program is crucial to protecting the state’s drinking water and preserving natural beauty that attracts big tourism dollars. And they say the amendment will ensure it continues.

Aliki Moncrief is field director of the campaign, also known as Florida’s Water and Land Legacy.  She says money for conservation projects hasn’t always been hard to come by. When Florida Forever began, its budget was $300 million a year.

“Going back to governors like Bob Graham, Bob Martinez, Jeb Bush,” she says. “Every single Florida governor has stood behind and understood the value of preserving land today so that we can preserve a beautiful Florida tomorrow. In 2009 that changed.”

Funding for Florida Forever was zeroed out under Gov. Charlie Crist and has inched up ever since. The Great Recession and the housing market crash had a lot to do with it. Money for Florida Forever comes from a tax on real estate transactions.  But when the housing market cratered, the shrinking number of transactions sapped the land fund too. Since then, the Legislature hasn’t funded the program with anywhere close to $300 million.

Florida Wildlife Federation President Manley Fuller says Amendment 1 would cut the Legislature out of the equation, taking a third of that property-exchange tax revenue and earmarking it for conservation.

“Our Constitution provides for this mechanism. It provides, when the citizens do not believe that the Legislature is meeting the needs that they would like to be addressed, then there’s a process,” Fuller says. “And we’ve gone through that process. We’ve had approximately a million Floridians sign a petition.”

Polling shows high public support for the idea, too. But some in state government are not Amendment 1 cheerleaders.

“They’re polling a population that has been grossly uninformed,” says state Sen. Alan Hays (R-Umatilla). He says there’s such a thing as too much conservation land.

“We should not have a specified dollar amount nor a specified acreage amount that we should acquire,” he says. “That is irresponsible.”

Hays says he wants a stricter accounting of how purchased land will be used and what it will cost to maintain it.

“It’s just wrong to use dollars that could be used for healthcare or for education or for transportation just so we can buy some property that somebody says, ‘Oh, yes, I’d love to take $6- or $8 million from the state of Florida for this piece of property that I paid $200,000 for,” he says.

Florida Agriculture Commissioner Adam Putnam says he also will not be voting for Amendment 1.

“I am concerned about writing the state’s budget into the state’s Constitution, and that is essentially what Amendment 1 does,” he says.

That was also the argument the Tampa Bay Times editorial board made against the the amendment recently. But among Amendment 1 supporters are former Republican House Speaker Dean Cannon and cities and counties including Gainesville and Palm Beach.

Amendment 1 Would Ensure Funding for Environment

In what supporters are labeling the "end game for conservation in Florida," voters this November are being asked to change the state constitution to earmark billions of tax dollars for a host of environmental protection projects.