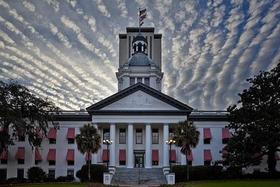 A Florida Senate Committee passed a measure urging Congress to preserve the Deferred Action for Childhood Arrivals Program, or DACA.

The Children, Families, and Elder Affairs committee voted in favor of the bill by a vote of three to two. The measure will now be heard by the Senate Judiciary Committee. DACA was put into place by the Obama Administration in 2012. It allows minors, so-called Dreamers, who entered the country illegally to be protected from deportation and receive a work visa. The bill’s sponsor, Miami-Dade Democrat Daphne Campbell, says Congress must protect Dreamers.

The Trump Administration canceled DACA last September, but announced it would give Congress six months to pass legislation protecting the program. There’s been bipartisan support for passing an alternative, but lawmakers have yet to reach an agreement.

Congress, once again, finds itself days away from a potential government shutdown, and a fight over immigration could stand in the way of a deal to prevent it.

A Republican congressman from Florida said Tuesday he won't support a year-end spending measure unless Congress passes a solution for immigrants brought into the country illegally as children.

Republicans who might have been leery of supporting the bipartisan Dream Act got a more conservative-friendly option this week in the form of a new bill dubbed the SUCCEED Act (Solution for Undocumented Children through Careers, Employment, Education and Defending our nation).

The subject of illegal immigration is never far from the front burner of politics, especially in the wake of President Trump's recent decision to look at rescinding DACA. That could revoke the legal status of children brought illegally into the country.

President Donald Trump's decision to do away with his predecessor's policy that benefited hundreds of thousands of young undocumented immigrants known as “dreamers” has put Florida Republicans in a bind.