Florida veterans were forced to wait at least 30 days for nearly 93,000 medical appointments at VA medical facilities from September through February, and half of those delays were found at just seven sites in north Florida and the Panhandle, according to government data reviewed by The Associated Press. 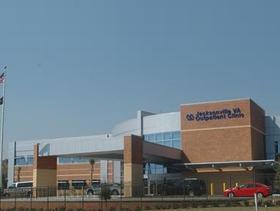 The data shows the U.S. Department of Veterans Affairs is far from reaching its goal of reducing long waits for care at some hospitals and clinics in its massive health system.

The VA began auditing and reporting wait times last spring after a scandal over attempts at many facilities to cover up delays by manipulating the medical network's scheduling system. The agency vowed better transparency and to improve wait times. Its current goal calls for patients to be seen within 30 days.

In Florida during the six-month period, nearly 29,000 appointments involved a delay of longer than 60 days — a figure that doesn't include cancelations, patient no-shows, or instances where the veteran gave up and sought care elsewhere.

Of those delayed appointments, 2,532 were at the Pensacola VA clinic; 4,157 were at the Malcom Randall VA in Gainesville; and a whopping 7,117 were at the VA clinic in Jacksonville.

Tampa and Orlando facilities also had lengthy waits of more than two months.

Six of the nation's 75 clinics and hospitals with the highest percentage of patients waiting more than 30 days for care were located in Florida, according to AP's review of wait times from September through January. They are in Jacksonville, Tallahassee, Panama City Beach, Pensacola, Lecanto and Gainesville. The VA clinic in St. Augustine is in the top 100.

Jerome Hutchinson, a 63-year-old Army vet, says he doesn't have to wait for routine check-ups, but if he gets sick and needs to see a doctor immediately he can't get an appointment in Jacksonville. Instead, he has to drive 71 miles to Gainesville.

"To be honest, anything that happens to me in between, it's going to be a problem. They said, 'You have to go to Gainesville' for immediate treatment," said Hutchinson, who was drafted in 1973, but did not serve in Vietnam.

At the Jacksonville Outpatient Clinic, the worst offender in the state, 16 percent of its 100,716 appointments involved delays of more than 30 days. That's nearly six times worse than the national average of 2.8 percent, according to the data.

There were more appointments that took longer than 60 days to schedule at that one clinic than all the clinics in New York and Pennsylvania combined. And more than 2,006 appointments had wait times of least three months even through the clinic is almost brand new.

The clinic, which provides primary care and surgical and psychiatric services for acute and chronically ill veterans, is experiencing the same problem as several other new VA facilities around the country — by the time construction was completed, the demand from new patients had outpaced its abilities.

Vets love north Florida for its good weather, reasonably priced real estate and proximity to several military bases. But the VA has moved too slowly to ramp services to meet a rising number of patients.

Recently, the Jacksonville clinic has been enrolling another 25 new patients per day — a growth rate that would require the VA to hire another doctor, nurse and medical support assistant every 10 weeks to keep up with demand, said Thomas Wisnieski, the health system's director.

Officials are hoping to lease 20,000-square-feet of additional clinic space while they begin the planning process for yet another new building.

Things are almost as bad at the VA clinic in Tallahassee, where nearly 12 percent of appointments take longer than 30 days to complete — about four times the national average. A new outpatient VA clinic is scheduled to open in Tallahassee next year.

In Pensacola and Panama City Beach, just under 10 percent of appointments fail to meet the VA's timeliness standard. A groundbreaking ceremony was held in August for a new clinic in Panama City.

Hallie Williams-Bey, the chairman of the Northeast Florida Veterans Council, said that as bad as the statistics look now, things are much better than they were a decade ago.

Williams-Bey, who served with the Marines in Vietnam, said when he was diagnosed with prostate cancer in 2000, VA doctors told him that patient backlogs meant it would be two years before he could start treatment for the slow-growing disease.

"That was the wait list, back in those days," he said.

Clinic Waits A Problem Across the Nation

The Veterans Affairs system operates more than 1,000 facilities. A look at some regions where waits were longest over a six-month period beginning on Sept. 1 and ending Feb. 28:

Northern Florida: It's a long drive from the tip of Florida's panhandle to Jacksonville, on the Atlantic coast, but with some detours you can hit four of the most delay-prone VA outpatient clinics in the country.

The VA clinics in Jacksonville, Tallahassee, Panama City and Pensacola collectively completed 250,000 appointments during the six-month period. Nearly 13 percent of those visits involved a wait of longer than 30 days, well above the national average of 2.8 percent. In Jacksonville, 7,117 appointments involved a wait of more than 60 days — more than in the entire states of New York, New Jersey and Connecticut combined.

Central Alabama: When the U.S. government built a veterans hospital in Tuskegee, Alabama, in 1923, the idea was to create a haven for black servicemen excluded from "whites only" medical facilities. From September to February, that facility and its sister medical center in nearby Montgomery, Alabama, struggled more than any other VA hospitals to meet the department's goals for timely access to care. About 9 percent of patient visits involved a wait of longer than 30 days.

Georgia: Of the 100 VA hospitals and clinics with the most patients waiting more than 30 days for care, 10 are in Georgia. A small VA clinic near Fort Benning, in Columbus, Georgia, has been among the worst performers. About 13 percent patient visits involved a wait of more than 30 days. It has close to the longest average wait for mental health care in the country. At the VA hospital in Dublin, one in 36 appointments involved a wait longer than 60 days.

Eastern North Carolina: North Carolina is home to the Army's Fort Bragg, the Marines' Camp Lejeune, and nine of the 50 VA medical facilities with the most patients waiting more than 30 days for care. Around 16 percent of the vets getting treatment at the clinic in Jacksonville, North Carolina, had to wait longer than 30 days for an appointment. Close to 1 in 9 patients there had to wait longer than 60 days to see a caregiver. The VA has opened several new clinics in the state in recent years to deal with long waits, but those new and expanded sites haven't met expanding demand.

Hampton Roads, Virginia: A home to U.S. naval power, and a popular spot for military retirees, the Hampton Roads region of southeastern Virginia also ranks among the worst places for a vet to get a timely appointment at the VA. About 7.3 percent of the appointments completed at the VA hospital in Hampton failed to meet the department's timeliness standards. At the outpatient clinic in Virginia Beach, 18 percent of patient visits involved a wait of longer than 30 days — although things have been improving. The clinic completed nearly 89 percent of its visits in a timely fashion in February, compared to 76 percent six months earlier.

Tennessee and Kentucky: The VA has opened a host of small medical clinics in rural Tennessee and southern Kentucky, and while they treat a modest number of patients, those that do come are among the most likely to face a long wait for care. Thirteen of the 100 VA sites with the highest percentage of patients waiting more than 30 days are in the two states. The outpatient clinic in Hopkinsville, Kentucky, has the highest percentage of delayed appointments of any VA clinic in the country. Nearly 20 percent of the 5,377 appointments completed at that facility involved a wait of longer than 30 days, and things have been getting steadily worse since the summer.