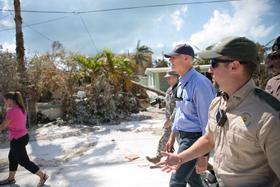 Florida’s third quarter tourism numbers put 2017’s total visitors at 88.2 million—a record mark and more than three percent higher than at this point in 2016.  Hurricane Irma blew through in September forcing evacuations throughout Florida and leaving mountains of debris in its wake.  Governor Rick Scott chalks up the increase to an ad campaign following the storm assuring potential tourists the state is open for business.

Florida House Speaker Richard Corcoran, R-Land O'Lakes, is filing a lawsuit to stop what he calls an illegal tax being charged by the city of Tampa.

The Republican legislator announced the lawsuit on Thursday. The lawsuit is part of a series of moves Corcoran announced to go after local economic development and local tourism marketing agencies.