FL Takes Hard Line On Opioids But Some Question Approach 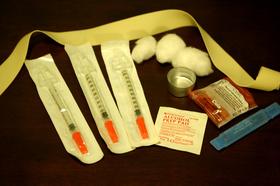 States across the country are struggling to hold off a rising tide of opioid abuse and Florida is no exception.  But the return of harsh penalties for possession—a hallmark of the war on drugs—is frustrating a broad spectrum of advocates and officials.

“So now some people today say that the solution of drug abuse is to be more accepting of the problem,” Sessions said.

“They say the answer is always treatment, only treatment do they suggest,” Sessions said.  “They say don’t talk about enforcement, gosh we can’t have prosecutions.  They say don’t say no to me, don’t tell me what I can’t do.”

Sessions is pushing a return to the tough on crime approach championed during the war on drugs. And his words caught the attention of a former Florida lawmaker.

“I am either famously or infamously known as a member of congress who got busted purchasing drugs,” former Republican Congressman Trey Radel says.

His resignation came after an undercover officer arrested him in 2014 trying to buy cocaine.

In office, Radel worked to roll back minimum mandatory sentences in the federal system, and he believes Republicans in particular need to abandon the lock-them-up approach Sessions is trumpeting.

Radel says the GOP should oppose the policy, “Whether you’re a fiscal conservative and watching our money get thrown out the window with no solutions whatsoever, or if you’re a social conservative—the way that it breaks up families, and renders really good people obsolete and even more of a drain on society.”

“One of the most important things that this bill does is it hopefully gets the drug dealers off the street,” Scott explains.  “The penalties are going to be a lot worse.”

The measure imposes mandatory minimum penalties for fentanyl and its derivatives.  It’s a provision state senators stripped out but then added back in at the last minute.  Attorney General Pam Bondi lobbied hard for the penalty and she applauds the move.

“It’s much needed,” Bondi says without hesitation, “and will a three year minimum mandatory make a difference?  Heck yeah it will—it’s going to get these monsters off the streets for three years while we can clean this problem up throughout our country.”

Prior to this, Florida has been moving away from mandatory minimum sentences.  Bondi argues no ordinary addict will wind up with the 4 grams that qualifies as a trafficking amount, but some Republican lawmakers are skeptical.  St. Petersburg Republican Senator Jeff Brandes points out the measure includes the weight of mixtures—so that a grain or two of fentanyl in a bag of some other powder would be calculated as if the entire amount is pure fentanyl.

“Of course, Florida is at the bottom of all fifty states in mental health and substance abuse funding per capita,” Rutherford says.  “What we have found though, is that the budget that was approved that went into effect July 1 this year Florida actually reduced by an additional $11 million what it spent on mental health and substance abuse funding.”

Since Scott and Bondi took office they have worked diligently to shutter the pill mills responsible for an explosion in prescription opioid abuse.  But many people have argued the state didn’t do enough to help addicts.

A 2014 study from the Journal of the American Medical Association Psychiatry and a 2015 study in the New England Journal of Medicine indicate as prescription drugs dried up, abuse of street drugs like heroin grew.  A Florida medical examiners report shows the number of deaths caused by heroin in the first half of 2016 jumped nearly 27 percent compared to the same period last year—a total of 406 fatalities.

The number of deaths tied to fentanyl and its analogs is more than double that.

Manatee and Sarasota Counties have seen overdose deaths from drugs like heroin, fentanyl and carfentanil spike in the past few years. At the same time, the number of children being removed from their homes and placed into the area’s foster care system has skyrocketed. There’s a connection between the increases.

Parts of the stalled Senate health care bill could hurt those addicted to opioids, according to U.S. Rep. Kathy Castor. The Tampa Democrat says if the bill passes, it will limit access to substance abuse treatment.