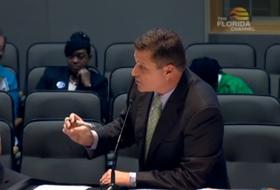 Florida levies a tax on communications services—things like cable and cell phones, but also streaming services.  Now one lawmaker wants to carve out internet video from the tax.

When Floridians sit down to binge the latest season of a show on Netflix or Hulu they’re probably not thinking about taxes, but that doesn’t mean they aren’t paying them.  In addition to sales tax, Florida charges about seven and a half percent on communications services—and that includes streaming.  Local governments can tack their own charges onto the tab as well.

St. Petersburg Republican Senator Jeff Brandes wants to change that.  He’s filed a measure that would exempt internet video service from the tax and prohibit any other charge or fee being added to the bill.

A Senate Republican on Monday proposed providing a property-tax exemption for permanently installed generators used to provide power when electricity goes out.

Despite past failed legislative attempts, a bipartisan pair of lawmakers is vowing to continue their work on criminal justice reform—particularly within Florida’s prison system.

The Department of Justice is promising a return to the law and order enforcement policies of the war on drugs.  Some Republican lawmakers are worried those policies might undermine state laws.