FL Rep Aims To Clarify When Cops Should Seize Guns 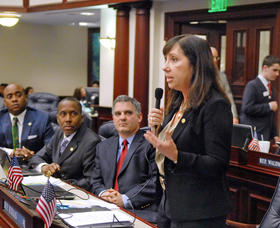 State lawmakers will consider a raft of gun bills this session primarily aimed at expanding rights.  But one representative is focused on making it easier to get firearms out of abusive households.

Florida state law already prohibits people named in a restraining order from having a firearm, but Rep. Lori Berman (D-Lantana) wants to take a step further.

Her measure would expand prohibitions to temporary restraining orders and it directs officers to seize firearms when they have probable cause domestic violence has occurred.

“So my bill seeks to make it very clear that in that situation they can take the firearm and retain the firearm until there’s a final adjudication on the charges—on the domestic violence charges,” Berman says.

Under the bill, law enforcement agencies would have to return the firearm within two weeks of court proceedings unless a judge orders the owner to surrender the weapon.

Top Issues of the 2017 Legislative Session

The Florida legislature will convene on Tuesday, March 7 for the start of its annual, 60-day session. The top priority is ironing out a state budget for the 2016-2017 fiscal year. But to get there, lawmakers will have to address dozens of other issues.