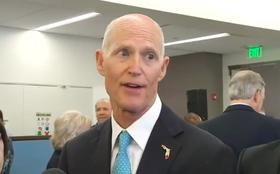 The Florida House is wasting no time pursuing one of Governor Rick Scott’s session priorities.  One committee will take up a tax and fee measure on the opening day.

“So what I want to get accomplished now is whether we do it through the Legislature or we do it through the Constitution Revision Commission, I would like something on the ballot that says it will take a supermajority of the Legislature to increase a fee or a tax,” Scott said at the time.  “So we can continue this economy going, so as we grow this economy we can invest in what we care about.”

The House plan, which sets the supermajority at two thirds, will eventually need to gain approval from Florida voters at the ballot box.

With Scott and Corcoran widely rumored to be gearing up for 2018 election bids, the proposal is seen by some as an attempt to drive supporters to the polls.

The aftermath of Hurricane Irma, the current dialogue about sexual misconduct, the opioid crisis and an election year in which Florida voters will replace Republican Gov. Rick Scott and all three Cabinet members will all play into the dynamics of the Legislature's annual 60-day session.

Health-insurance policies would be required to provide coverage for FDA-approved contraceptive drugs without imposing deductibles, coinsurance or co-payment requirements under a bill filed Friday by state Sen. Lauren Book, D-Plantation.

Public records advocates are opposing a number of bills that will be considered by the Florida legislature this year.