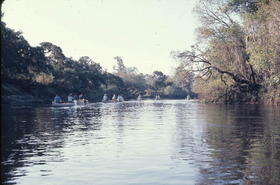 Cabinet officials signed off on a rural land easement in Polk County to protect the Peace River and they also purchased a Gilchrist County parcel to protect the Blue Springs and the Santa Fe River.  The state’s land acquisition fund has about $75 million, and new environmental secretary Noah Valenstein says balancing interests will be key in adding to the fund in the future.

“When we bring in projects that really resonate with the community,” Valenstein says, “resonate with a broad array of stakeholders from agriculture interests, environmental, our local chambers of commerce and businesses, I think that really tells the story for us.”

“These two land acquisition deals—that is a very big day at the Capitol,” Draper says, “because we not only got to see the Cabinet protect one of Florida’s most important springs, but we also got to see them protect some very important habitat down in the Peace River watershed.”

Still, many environmentalists believe the state needs to devote more dollars to land conservation.  A number of groups criticized lawmakers for refusing to send money to the Florida Forever Trust Fund this year after voters overwhelmingly approved Amendment 1 in 2014.  Instead, lawmakers put money toward rural easements.

The Florida House is pushing to change how money in one of the state’s primary environmental trust funds is spent.  But most lawmakers were in the dark about how much money the fund will get as the measure went to a vote.