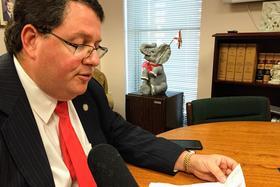 “Governor Scott,” Rep. Randy Fine (R-Brevard Co.) begins, “I was invited today by Brevard County’s local zoo to join you tomorrow at a hurriedly arranged event you are planning in our area.”

Newly minted, Fine got on Gov. Rick Scott’s bad side because of his vote to eliminate two cherished promotional agencies—Enterprise Florida and Visit Florida.

“Based on media reports I have read I assume you are visiting to make your case for Enterprise Florida, Visit Florida and incentive programs,” Fine continues.

After Fine and eight other Republicans on the Careers and Competition Subcommittee voted to shutter the agencies, Scott took the unusual step of touring the state and calling out members of his own party for their votes.

At the Brevard County Zoo he used an announcement about the state’s tourism numbers to criticize the move’s impact on jobs.

And Fine’s wasn’t the only district that got a visit.  The Governor made stops in Tampa, Cape Coral, Panama City and St. Cloud—the home bases of Shawn Harrison, Dane Eagle, Jay Trumbull and Mike LaRosa respectively.

And the bill’s sponsor, Rep. Paul Renner (R-Palm Coast) got more than just a visit.

Scott’s campaign organization Let’s Get to Work launched a robocall in his district.

“Unfortunately your state Rep., Paul Renner, is playing politics with Florida’s jobs.” Scott says on the call.  “He voted to kill our state’s tourism and jobs program and that will destroy our economy and lead to higher taxes.”

“I’m asking you to take action now,” the call finishes, “and tell your Rep. he can’t vote again to kill Florida jobs.”

For his part, Renner doesn’t fault the governor for traveling the state to make his case.  But Tuesday in the House Appropriations Committee even some Democrats took issue with Scott’s tactics.

The 30-member appropriations panel was the measure’s last stop before hitting the House floor—members voted 18 to 12 in favor of the bill.

“So we’re putting them on a leash—a short leash,” Renner explained of the amendment.  “And provided that they show measurable progress and success with the new accountability measures we’ve put in place in this bill then there’s certainly an opportunity down the road for them to ask for more.”

As the legislative session approaches, it’s unclear how much of Corcoran’s posturing is a bargaining position.  Governor Scott’s primary concern is jobs, and he believes Enterprise Florida and Visit Florida are key to getting them.  He’s unlikely to look kindly on a measure gutting either agency.

Corcoran faces a tough sell in the Senate, too.  Budget planners there have concerns about oversight and the level of funding, but they believe both agencies serve an important purpose.

Renner argues there is a better target for economic development.

“The tax on commercial leases,” Renner says.  “In my county alone on a given month depending on the month between $220,000 and $260,000 is paid by small, medium and large businesses that lease their space to the government in this tax that no other state in the country charges.”

That’s a central plank in Governor Scott’s tax cut proposal, and when lawmakers gather for the legislative session they’ll likely be grasping for whatever shred of common ground they can find.

In his letter, Rep. Fine points to one way forward.

“I always found the best outcomes come from sitting down in person and finding common ground,” Fine says.  “Rather than us talking at each other in the media, I’d prefer to talk to you in person.  It is much easier for me to make a five minute elevator trip from the 14th floor to the first floor of the Capitol than for you to fly to the Brevard Zoo.”