Florida gets a lot of federal funding for refugees, including people entering the state from Cuba and Haiti. But that money could go away if legislation passes pulling the state out of the federal refugee resettlement program.

According to a legislative analysis, the state got more than $250 million last year for refugee services. The legislation pulling the state out of the federal refugee resettlement program targets Syrian refugees.But most of the refugees into Florida are from Cuba and Haiti. 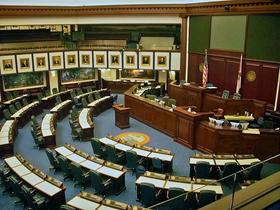 Mark Schlakman with Florida State University’s Center for the Advancement of Human Rights said Congress extended refugee benefits decades ago to people entering Florida from Cuba and Haiti. The federal government could reallocate what Florida currently gets to other states.

“It could be a cue for the states to go back to Congress to get that special status that Florida’s had since 1980 revisited and basically set aside so they would get the value of those federal funds,” he said.

Most of the refugees into Florida are from Cuba. Schlakman says he thinks lawmakers didn’t realize the state could lose the federal funding.

More than 500 refugees were approved for resettlement in the Tampa Bay between July 2016 and July 2017.

But more than half of those are on hold after Trump’s executive order suspending incoming refugees for 120 days.

A boardroom in the University of South Florida’s Muma College of Business may be the last place you expect a leader of a European country to turn up – but that’s been the case twice in the last four months.

Urban Ahlin is the Speaker of the Swedish Parliament.

INTERACTIVE: Where Do Florida Members Of Congress Stand On Trump's Immigration Order?

Do you know where your congressional delegates stand on president Donald Trump's immigration order?