Facebook Rolls Out Tools For Lawmakers To Track Voters

As lawmakers return to Washington to debate healthcare, they’ll have new ways of communicating with voters back home, through Facebook. But it’s not yet clear how the social media giant’s new tools could affect the political conversation. 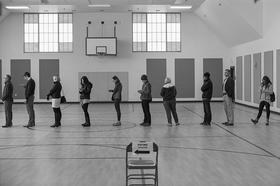 University of South Florida political scientist Susan MacManus says lawmakers are going to go where the people are. And for many, that’s Facebook.

“It’s not surprising that Facebook and others would think of a way to better connect people with their elected officials and to enhance civic engagement by using a communication tool that everyone’s using,” MacManus said. “The question is always, will people really want to use it? Because you cannot make people vote. You cannot make people interact with their government.”

Lately, U.S. Senator Marco Rubio has taken to broadcasting Facebook live videos from his office. Here’s a segment from his most recent talk on healthcare.

“We can disagree or agree on it. We don’t have to hate each other over it," Rubio said. "But what I can’t tolerate, or what I really am bothered by, is when we can’t have an honest debate because were not debating the facts.”

And voters worried about healthcare are taking the same tack, crowding into the Senator’s Tallahassee office, and streaming it live on Facebook. Breast cancer, stroke and aneurysm survivor Molly Gosline told her story to Rubio staffer Brian Mimbs.

“If it had not been for the ACA, I am telling you Brian, I’ve told this, or I’ve tried to tell Rubio, I would not be alive,” Gosline said.

“Elected officials have the ability to pretty much identify who’s their constituents or not. They also can get some feedback or share their thoughts on stories that are important to their district or to their region,” Jewett said.

“But now they can also gather feedback from their constituents through Facebook directly. And they can do polls and that sort of thing. And they can basically target and say, ‘Hey, what’s important to you all?’” Jewett said.

Like it or not, he says social media is part of our politics.

“Any candidate who is serious is going to get into social media in a big way. And probably not only that, if they’re a big enough campaign and they’re well-funded, they’re gonna have a social media director,” he said. 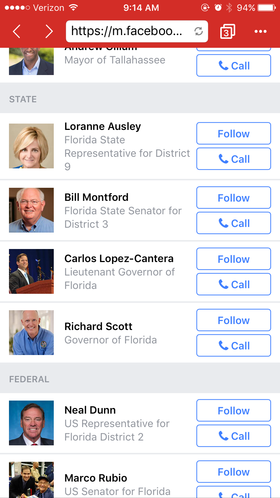 The tools could elevate the opinions of a broader swath of voters, and the issues that are important to them right now. But MacManus says it’s too early to know how Facebook comments will compare to other communications.

“Two things really grab the attention of an elected official: it’s a constituent who expresses themselves in their own words, whether that’s a direct phone call or an email or a personal letter,” MacManus said.

And this all depends on whether voters are open to their political and personal lives overlapping in new ways.

“We do know from previous elections and studies that have been done, that there are people who regard Facebook as entertainment and private. And the last thing they want is any kind of intrusion of politics into that space,” MacManus said.

MacManus says this all comes at a time when public trust in lawmakers is plummeting.

“According to the most recent surveys, just 20%, that’s only one in five Americans, say they trust government to do what’s right for them. And that’s the lowest it’s ever been in history. So it’s very troubling that people feel alienated from government,” she said.

But MacManus says if Facebook can make voters feel like they’re being heard, then it could be part of the solution.

With Democrats and some Republicans increasing calls this week to fully reject a federal commission's request for voter information, Florida Secretary of State Ken Detzner announced Thursday that the state will only provide publicly available data.

Despite a bipartisan backlash against a White House commission's request for information about states' voter rolls, Gov. Rick Scott's administration is still not saying whether Florida will provide the potentially sensitive information.

Rubio Will Vote To Proceed With Obamacare Repeal Bill

U.S. Sen. Marco Rubio, pleased that his demands were met on crafting the bill to repeal Obamacare, said he was ready to announce his support for the Republican backed legislation, the Miami Herald reported.