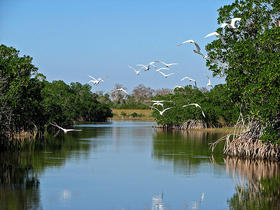 Governor-elect Ron Desantis’s environmental transition team is focusing on water quality and supply. But when climate change didn’t come up in the team’s discussions, advocates for environmental protection took action.

Prior to winning the Governors’ race Ron Desantis promised to restore the Everglades, and preserve the state’s beaches. On December 10th his environmental transition team met for the first time to discuss water quality and supply.

The main focus: Everglades Restoration, after Red Tide cause a state of emergency in seven counties. Department of Environmental Protection Secretary Noah Valenstein says one plan is building water storage pools to keep contaminated water separate, "main drivers of everglades restoration are large storage and conveyance features to restore the everglades. So on the east coast you have the C-44 reservoir."

That reservoir is paid for by the state and federal government, and the one on the west coast, the C-43 reservoir, is fully funded by the state. Valenstein says the reservoirs will create a lot of space for water storage, “combined these two reservoirs will provide more than 40 billion gallons of storage as well as treatment components to protect our estuaries." But the west coast reservoir won’t be done until 2022 and others may take longer.

“I had a lot of opportunities to enjoy the nature and as the years went by you slowly start to see the change and the enjoyment of where you’re going because you see animals that are dying, some waters aren’t suitable to swim in anymore, and these are water I’ve been swimming in since I can remember." She added that, "there is an emotional aspect to it knowing that in my life time and I’m only 22 there’s been so much change to the point that we can’t even enjoy the nature that we grew up in.”.

During his campaign Desantis took a tour of the Everglades. Afterward he told reporters, “the sea rise may be because of human activity and the changing climate, you know maybe it’s not I don’t know but what I do know is as I see the sea rising I see the increased flooding in south Florida. So I think you’d be a fool not to consider that an issue that we need to address.”

Along with asking Desantis to acknowledge climate change as a threat, the letter asks that he make polluters pay for clean up, appoint scientist to water protection boards, and create a fund to support infrastructure investments.

The race for governor is not the only statewide political contest during primary season. Republicans and Democrats will also choose their favorite candidate to run for the state's top consumer watchdog: the Commissioner of Agriculture and Consumer Services.

David Williams and Alex Massie sat side by side at W.P. Franklin Lock along the Caloosahatchee River, waiting for something to nibble at their fishing lines. They were catching fish to eat, despite high levels of fecal bacteria recently closing down a beach just a few yards from their fishing spot.

Williams, of Alva, said he's been fishing along the Caloosahatchee for 65 years. He's lived off of the river. And he's not concerned about the high levels of E. Coli in the water.

"It's just a happening thing," Williams said. "There's nothing you can do about it."