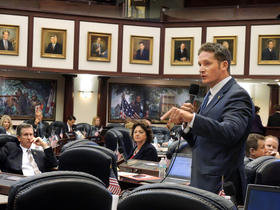 Rep. Dane Eagle (R-Cape Coral) is backing a measure that would impose stiffer punishments on undocumented offenders.  The bill raises penalties by one degree for five violent crimes.  But Kara Gross from the ACLU of Florida argues the measure won’t survive a constitutional challenge.

In what was dubbed an "inevitable sequel" in a long-running legal battle, a state appeals court Tuesday heard arguments in a dispute about Medicaid payments to hospitals that provide emergency care to undocumented immigrants.

Guest Workers, Legal Yet Not Quite Free, Pick Florida's Oranges

In citrus-growing areas, you see lots of old converted school buses on the road; these are company buses, carrying the workers who will harvest oranges and grapefruit. And in the evening, some of those buses roll into a truck stop on a two-lane country road south of the town of LaBelle. Young men scramble out, trot into the store and line up at the taco counter.

This is where I met Esteban Gonzalez and his brother Isaac, from the Mexican state of Veracruz.

Federal law does not prohibit undocumented students from enrolling in college, but it does something nearly as effective, banning them from receiving government aid. In recent years, though, some undocumented students have stumbled upon a little-known, nonprofit online university that doesn't charge tuition and doesn't care about students' legal status.