For many young girls its hard navigating middle and high school. There’s cafeteria politics coupled with changing relationships among friends and family. It’s also a time for body changes, and  one group of young women say with all they have going on, the last thing they want to deal with is a dress code. 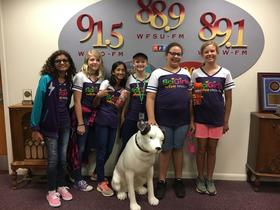 It starts with from an observation from middle schooler Luxmi Narayan.

"Sometimes I feel it’s unfair to us girls. Boys don’t get as much flack about their clothes. They can wear shorts to school and no one cares....If boy shorts were made like girl shorts, we wouldn’t have a problem.”

And then this response, from middle schooler Dana Smith:

"I like to express who I am and how I feel. I have a right to do that as a U.S. citizen and it’s unfair for the schools to try to make us be all the same when we’re really not, not at all.”

Luxmie and Dana recently came to the WFSU Studios as part of the annual Sci Girls Summer Camp. But the issue weighing heaviest on their minds is the dress code—specifically the way schools enforce it.

The struggle is real.

Leggings or jeggings, shorts or skirt.  Width of straps, length of shirt. And the older a girl gets, the more complicated these rules become, yet the girls argue boys aren’t held to the same standards.

“Boys, they don’t have a set dress codes and there are boys who come to school wearing these tiny shorts," Emma Bryson. And her friend, Aaliyah Davis, takes a personal offense to a particular style of boy shorts, called Chubbies. "They were super short," she says.

And don't get the girls started on muscle shirts, which they say boys can largely get away with.

In a recent blog, the American Civil Liberties Union noted the dress code gender bias against girls. And Emma says her school has even gone so far as to separate the sexes specifically to lecture girls on what not to wear.

“We were talked to in one of our classes, the boys had to be pushed out and we were talked to about how the girls had to start wearing longer skirts because the ‘boys couldn’t control themselves’ if our skirts were too short.

At issue for these young women is the way the schools enforce dress code policies. All the girls who spoke agree on the need for rules, but fellow SciGirl Katelynn Wynn says the way the way the policies are applied is often subjective and out-right discriminatory. She says when a girl gets called out it can be a hurtful and humiliating experience, one she’s seen it first-hand.

“There are skinny girls they don’t pay attention to but there’s a bigger girl and one day she got off the bus and the teacher... was like, ‘honey, I think you need to change. Go call your parents.”

“I think it’s because of gender stereotypes and body stereotypes," says Leon High Schooler Emma Macedo. "If you have a certain build you have to do a certain thing or if you don’t have that build you can’t do that. So if you’re wearing certain clothes and you don’t look the same way as someone wearing the same clothes but you don’t look the same way someone else would wearing the same clothes you’d be punished differently or not punished.”

Opinions like these come as a surprise to guidance counselor Susan Goracke, a former teacher.

“What I was listening to as a mom because I have three girls at home, it’s hard to find straps that are wide enough or shorts that are long enough.”

Goracke is also a mom of three daughters. And she says shopping for clothes that fit the dress codes is hard. What is sold in stores and considered fashionable often conflicts with dress rules. Some policies ban logos on clothes—and there’s one on nearly every piece of clothing on the market. Even socks are subjected to the rules. But Goracke says despite the headaches and the complaints, there are rules are in place reason.

“But at the same time as a teacher I definitely want them—my motto is modest is hottest. I always teach that to my students and my girls at home. No one wants to see everything.”

The girls say they’re not pushing to abolish dress codes, and they’re certainly not out to show everything. But they want to be comfortable, and they’d like to see the rules enforced more equitably between girls and boys. After all, they say, they really hate the chubby shorts boys wear—which Aaliyah notes, are way more than three inches above the knee.