Dozens Of Veterans Are Running For Congress. But Does Military Service Prepare Them For Politics?

Veterans now make up less than 20 percent of Congress, compared with about 75 percent in the 1960s. Some high-profile candidates are trying to reverse that trend.

Listen
Listening...
/
Carson Frame and Bobbie O'Brien report on the dozens of veterans running for Congress this year.

Dozens of military veterans - many of them with recent service in Afghanistan and Iraq - are offering themselves as an antidote to Washington's partisan rancor.

They're running for Congress, often as political newcomers challenging longtime incumbents. Their campaign ads and websites play up their military experience and their service to the country.

"We're at a record low number of veteran representatives in Congress, and it's no coincidence that we're at a record level of toxic, hyper-partisanship," said Texas congressional candidate MJ Hegar, an Air Force veteran who is running as a Democrat in a historically Republican district that includes Fort Hood.  "I have a record of putting this country ahead of myself."

Hegar is challenging eight-term incumbent John Carter, a non-veteran with an extensive background in military affairs. She kicked off her campaign in June with an autobiographical video that earned more than 4 million views online and raised upwards of $750,000. It puts her combat experience front and center, starting with the day she earned the Purple Heart.

"I was on a rescue mission in Afghanistan as a combat search and rescue pilot. I heard the windshield crack and realized I'd been shot," Hegar tells viewers as the scene unfolds onscreen. "But I continued the mission and airlifted the patients out. After taking even more fire, we crashed a few miles away."

Grounded by the attack, Hegar tried to get a different job in air support, but Pentagon policy at the time barred women from combat roles. With assistance from the American Civil Liberties Union, Hegar challenged the policy in court and won.

Now, as she runs for Congress, Hegar says she put her military service at the center of her campaign not as a strategic move but as a reflection of who she is.

She argues that, while military experience isn't the only thing that defines a candidate, veterans are uniquely equipped to deal with socially and politically divisive issues.

"I think that veterans have been thrust into a melting pot of people, have had to take on large-scale obstacles, and have been all around the world and immersed in other cultures," she said.

At a campaign event in Austin, Democrats Debra Coe said Hegar has the kind of background that can help their party win control of Congress.

"She's not afraid of anything" Coe said. "She's fierce, and that's what we need."

Hegar is one of more than 400 veterans who've run for Congress this year, though some have already lost their primaries. As of mid-August, about 80 had won their party nominations; ten of those are women.

For former military members, it's not always easy to transition to politics.

"You're out there in a very nasty and polarized political environment; that's a big change from what most of our constituents saw in the military," said Norm Bonnyman of  Veterans Campaign , a non-partisan organization that trains veterans to run for office.

Among the challenges facing veterans: As newcomers to politics, they often have little experience raising money and may lack the political connections they need to get party support. Many also lack deep ties to a community because they moved around a lot during their years in the service.

Then there are the gerrymandered, less competitive districts that make it hard for anybody to beat an incumbent.

"You can run a very compelling candidate with a military biography, but you can't move a plus 20 Republican district into the Democrats' column with merely changing the biography of your candidate," said Jeremy Teigen, a political scientist from Ramapo College of New Jersey who wrote the book Why Veterans Run. 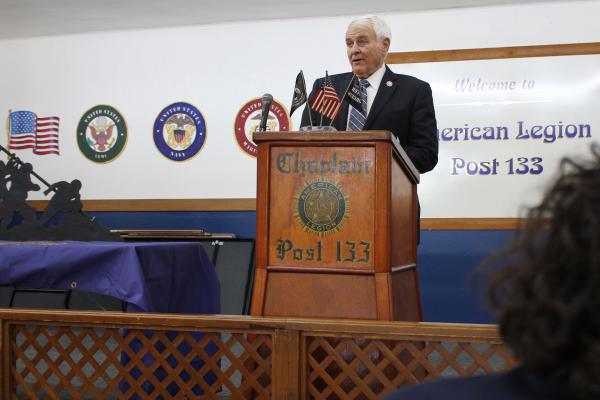 Carter, the Republican incumbent in Texas' 31st District, has said little during his reelection campaign about the military service of Hegar, his Democratic challenger. But he's played up his own support of the military.

Carter wrote and championed the Veterans Transplant Coverage Act, a newly-passed piece of legislation that allows veterans to receive organ transplants from non-veterans with their VA coverage. He also pushed to get additional funding for Fort Hood as part of the defense budget.

"By their very nature, soldiers and the military demand more attention, and I'm glad to give it to them," Carter said. "My overall congressional experience has been heavily centered on veterans affairs."

Carter has run against veterans before and never lost.

"I think we rise or fall on our accomplishments of our lives," Carter said. "That's generally how I run my race, whoever I'm running against. "

During a recent appearance by Carter at an American Legion post, many voters in the heavily Republican district said they didn't know much about Hegar, and that her veteran status was unlikely to make them vote across party lines.

The Cook Political Report in August ranked the seat "Likely Republican" in the November election.

After Generations Of Grief And Frustration, Families Of Korean War MIAs Are More Optimistic

The number of veterans in the VA healthcare system who are 70 or older is expected to grow 30 percent in the next eight years.

But the former Pentagon official is now running the VA said he's promised to protect the VA from politics and total privatization.