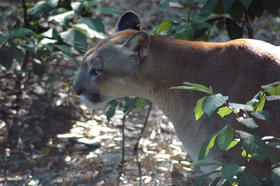 At one time, the Florida panther population spread across the Southeastern United States. Now the remaining 200 or so panthers are confined to Southwest Florida. Greg Knecht from The Nature Conservancy says habitat loss causes several fatal threats to the Florida panther.

“With growth in Florida, we add roads so there’s a potential for more vehicular fatalities. And then there’s the interspecies aggression. When we see increasing populations within a limited space, they actually start to prey upon one another,” says Knecht.

Knecht says this increase in the panther population can lead to even more collisions with panthers, which currently account for about 80 percent of panther deaths.

This past week in Collier County, a Florida Panther was fatally struck by a car. The leading cause of death for panthers is vehicle collisions, with 11 out of 15 panther deaths this year being vehicle-related. Just last year, there were 42 total deaths and 32 from vehicle collisions.

Meanwhile, Kipp Frolich with the Florida Fish and Wildlife Conservation Commission says despite vehicular fatalities, the panther population will continue to grow.

“We don’t have a way of estimating the actual number of panther kittens that are born every year. But in the last several decades, there’s been more births than deaths, which has led to our panther population growth,” says Frolich.

To protect panthers and drivers, Frolich says the FWC warns drivers to be aware of areas where panthers could be on the roads.

“In places where we do have the most panthers, we do have signs up. We ask people to keep a look out when panthers are most active. If they do have a collision with a panther, call our hotline and report it right away. Not all collisions actually result in death. Sometimes panthers are just injured, and we do make an effort to rescue them and rehabilitate them,” Frolich says.

The FWC says vehicle-related panther deaths have decreased in areas with crossings and fencing, but these efforts tend to be the most expensive in reducing collisions.

Florida Panther Fatalities On Pace For Another Record Year

Florida Fish and Wildlife Conservation Commission officials have documented 22 dead panthers so far this year. All but four of the animals died in vehicle collisions. Last year, 41 panthers died.

Darrell Land of FWC says the state’s panther population is estimated at up to 180 animals, compared with a few dozen 30 years ago.

Florida set a new record for the number of panthers killed on roads after a 1-year-old female panther was hit by a car on Tuesday.

If there's one critter considered to be one of the emblems of Florida - besides the manatee, of course - and never mind the mouse - it's the Florida panther.

The felines once prowled the entire Southeast, but relentless hunting thinned the herd to a mere 30 animals by the 1960's. Protections were put in place, and their recovery has been successful enough that there have been a growing number of complaints among ranchers about panther attacks on cattle and other domesticated animals.

Florida Fish and Wildlife describes the Florida panther as a conservation success story as its population has rebounded to about 180 from fewer than 30 when it first was listed in 1967.