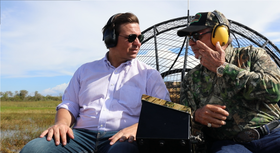 Governor Ron DeSantis wants $625 million dollars for environmental spending in the upcoming budget. DeSantis announced a plan Tuesday to fund more than 20 projects in the Everglades over the next five years.

The Governor says Everglades restoration could get a boost from what he calls an “historic” allocation of funds. His proposed budget includes $360 million dollars for Florida’s most vulnerable ecosystem.

“This is the first of four steps to get to the $2.5 billion that I committed to in my executive order, and that will be a $1 billion dollar increase over the previous 4-year investment,” DeSantis said during a press conference in Naples.

DeSantis says the completion of reservoirs and storm water treatment areas would remove a projected 200,000 pounds of phosphorous from Florida waters yearly – a principle cause of algae blooms.

An additional $50 million dollars would be earmarked to help protect Florida’s springs.

DeSantis also gave what he calls a “progress report” on his environmental executive order from earlier this month. He says the Department of Environmental Protection is vetting candidates for the newly-created statewide Chief Science Officer and the Blue-Green Algae Task Force.

After calling for the resignation of the entire South Florida Water Management District January 10, DeSantis also used Tuesday to announce his first two appointments to the board.

Chauncey Goss has previously served on advocacy groups like Captains for Clean Water and the Lee County Coastal Advisory Council.

“The Governor said – I’m All in on water quality, I’m all in on fixing it. And you’ve been living up to your word, I thank you for that,” Goss said while accepting the role.

Also appointed to the Water Management District’s board is South Florida environmentalist and businessman Ron Bergeron.

In a reorganizational move, DeSantis also recommends the state’s Environmental Crimes Enforcement Unit be moved from the Florida Fish and Wildlife Conservation Commission to DEP.

An update is expected this week in a legal dispute over Everglades restoration.

Governor Ron DeSantis is receiving high praise from some environmental groups for his quick action focused on the Everglades. Last week, the governor called for $2.5 billion for Everglades restoration and combatting red tide and blue-green algae across the state. He also empowered two separate task forces, one on toxic algae and another dedicated to sea-level rise. And he called for the resignation of the entire South Florida Water Management District governing board.

Preparations are underway for a long-anticipated reservoir project meant to help restore the Everglades and prevent toxic blue-green algae outbreaks around Florida’s coasts.

The South Florida Water Management District has started surveying areas where it can expand canals that run south of Lake Okeechobee. The canals will help move lake water south to an Everglades reservoir.

Everglades restoration needs to do more to account for climate change.

That’s the headline of a report released Wednesday by a Congressionally-appointed committee of scientists.

The report from the National Academies of Sciences, Engineering and Medicine says agencies involved in restoration need to do more analysis of how sea-level rise and increasing rainfall impact Everglades projects.