DeSantis Is Proposing Larger Teacher Bonuses, But Will They Cure Florida's Teacher Shortage? 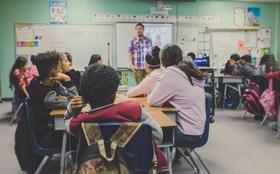 Governor Ron DeSantis is proposing changes to the state’s Best and Brightest program that he says will result in sizable bonuses for highly rated teachers. The move comes amid a teacher shortage that has made recruitment a necessity.

If public school teachers in Florida hit certain performance benchmarks, they may soon stand to benefit to the tune of as much as $9,000. An incentive program is already in place under Best & Brightest, which tops out at $6,000 for those rated “highly effective.” DeSantis says he can increase the bonuses with a $422 million investment.

But Scott Mazur, president of the Leon County Classroom Teachers Association, says only about a quarter of teachers will benefit.

“Let’s take the $422 million that is meant to go into this program. Based on the 2018-19 second survey from the Florida Department of Education for instructional staff, if you took that amount and divided it by the total amount of people that are instructional – it could yield about a $2,300 raise for instructional staff,” Mazur said. “This would start to bring us out of the – I think ranked 45th out of 50 states in teacher pay.”

“Quite frankly, we’re not investing in public schools or any system – even if it includes vouchers or charters, that would make individuals consider it a long-term career,” Mazur said.

Talia Milgrom-Elcott is the executive director of 100K in 10 – an organization aiming to add 100,000 teachers in STEM subjects nationwide by 2021. Like Mazur, she believes changes need to be of the long-term variety in order to attract teachers.

“The first step is salary, if it’s below what’s possible,” Milgrom-Elcott said. “A recent analysis showed us something really important – teaching used to be an above average pay in most states. Now it is below average in 42 states.”

Milgrom-Elcott says that doesn’t put the profession in good company.

“The only other jobs that have declined like that in their relative rank in terms of whether the people who work in them are well paid, are deliveries, or working in an electronics store, or in a warehouse,” she said.

In January, several members of The State Board of Education said differentiated pay might be one way to lure teachers for subjects with the greatest need. The Board’s chair said idea may be entertained. Milgrom-Elcott says such a concept stands to make a difference.

DeSantis has expressed interest in implementing a teacher recruitment program that gives tuition forgiveness in exchange for committing to the job for 5 years. The price tag on that is reportedly $10 million dollars. Milgrom-Elcott says some potential solutions are readily achievable:

“If we look at those things, and we make a few high-powered moves to support them – from the targeted salary adjustments we talked about, to targeted ways of making the work day a healthier one for teachers, I think we can expect to see teaching as a thriving sector.”

Though, in Mazur’s opinion, turning Florida’s teacher woes around hinges on supporting all departments that make schools function.

“What people need to realize is that public education – the folks that work at a school site, regardless of the content area and regardless of instructional or non-instructional – they all have a part to play in a positive impact on students,” Mazur said. “Until everybody in the entire system is treated with respect and provided with a career path, we’re going got have these shortages.”

Florida lawmakers want to give high school students another pathway to graduation. Two new bills are part of a larger push for expanded vocational education in the state.