After Florida’s Republican leaders laid out their plans Tuesday, the state’s liberal-leaning advocates and lawmakers outlined their priorities in what one activist called "the people's State of the State". In Florida’s Republican-led state capitol, Democrats’ priorities often don’t get very far. This year the state’s liberal-leaning activists are trying to block efforts the House of Representatives could pass as early as this week. 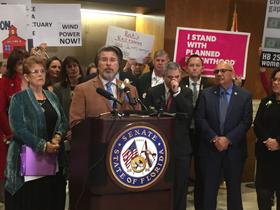 One of those bills would prohibit sanctuary policies in the state and punish local governments that don’t fully comply with federal immigration officials. Activist Julio Calderon hopes the bill will die like it has in past years.

“Whether it is students, farmworkers, children, they all come with us, because the diversity of our state needs to be protected. We’re here again and it’s not going to be different than any other year,” Calderon said.

Another measure would codify the state’s crisis pregnancy centers, and require the state health department to only contract with centers that solely encourage childbirth. Planned Parenthood activist Crishelle Bailey says pregnant women should be educated on all their options, including abortion.

“Planned Parenthood gives people the freedom of making unbiased choices which something that should be inherent when it involves another person’s health and wellbeing,” Bailey said. “We oppose any legislation that forces Florida taxpayers to fund fake clinics that operate with virtually no oversight and judge, shame, and intentionally try to trick women out of the care that they are seeking.”

The measure is heading to the floor in the House, and slated to get its second committee hearing in the Senate on Wednesday.

On some issues, Democrats and Republicans have completely opposite perspectives. Governor Rick Scott sees the state as one of the most cost-effective in the nation when it comes to per pupil school funding. But Ft. Lauderdale Democratic Senator Gary Farmer calls the $7,200 per student per year a joke.

House and Senate Democrats are also hoping to boost affordable housing funding this year. They say the need is even more urgent in the wake of Hurricane Irma, which demolished workforce housing in the Florida Keys, and sent thousands of Puerto Ricans to the state, where they’re now in need of a place to stay. Orlando Democrat Carlos Guillermo Smith’s district is home to a growing Puerto Rican population.

“If the governor says that he supports Puerto Rico and he supports the evacuees here on the mainland, when why is he stealing $92 million dollars out of the affordable housing trust fund while Puerto Ricans are sleeping in cars in Central Florida? Why? Why is he doing this?” Smith asked.

Even with bipartisan support for affordable housing, the capitol’s budget writers may dip into the state’s housing trust fund for other projects, as they have in past years.

But some environmental issues are getting more traction in both parties. Tampa Republican Senator Dana Young is again leading a bipartisan push to ban fracking.

And environmentalists are optimistic about winning funding for Florida Forever, the state’s land buying program. Aliki Moncrief of Florida Conservation Voters is banking on Republican Senator Rob Bradley, who’s the new chair of the appropriations committee.

“He acknowledged last year and again this year that now is the time to refuel funding for Florida Forever. He’s acknowledged that the Legislature hasn’t done a good enough job in terms of getting that water and land conservation amendment money to Florida Forever, so I’m optimistic,” Moncrief said.

Whatever happens, Democratic activists say they’ll remember this year’s session when they go to the ballot box in November. And they’re encouraging Florida voters to do the same.