To Dance Or Not To Dance At Mar-a-Lago, An Ethical Dilemma For Charities

The American Cancer Society has spent a lot of time in Washington opposing President Trump’s efforts to repeal and replace the Affordable Care Act. But that hasn’t changed the organization’s plans to host its annual winter gala at Mar-a-Lago -- the president’s Palm Beach resort.

Charities are split over the ethics and risks of hosting events at Mar-a-Lago, a venue owned by a sitting U.S. president. It’s the subject of an analysis in this month’s issue of The Chronicle of Philanthropy. Tim Sandoval, one of the co-authors of the report, spoke with WLRN’s Peter Haden.

Listen
Listening...
/
LISTEN: To Dance Or Not To Dance At Mar-a-Lago: An Ethical Dilemma For Charities?

WLRN:  What makes Mar-a-Lago such a draw for gala organizers?

SANDOVAL:  The events can be really lucrative. Many people flock to Palm Beach in the winter. A lot of wealthy folks own winter homes there -- and the charity ball and gala scene is a big part of social life.

What conundrums are some organizations now facing in hosting their event at Mar-a-Lago?

Some people think that it's a conflict of interest on its face --  that charities may be perceived as currying favor with the president for using his property. So that's No. 1. But in another way, some think that the mission of many of these charities conflicts with President Trump's policies and his actions. A good example is the American Cancer Society. Their advocacy arm has railed against cuts to the National Institutes of Health -- which President Trump has called for in his budget. Yet they are still going to hold that gala there in 2018 at Mar-a-Lago. They say, of course, “This event isn't really going to affect our advocacy or mission at all.” It certainly creates some tricky optics, however. 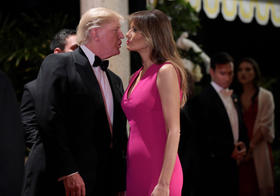 Though not all organizations have decided to continue hosting their charity events Mar-a-Lago, correct?

That is correct. The Dana-Farber Cancer Institute decided to move its event to The Breakers, which is another resort on Palm Beach. The Humane Association also decided to move its gala after it came to light that Donald Trump's sons hunt big game abroad. That conflicted with their mission as an animal welfare organization. So yes, there are some groups who are looking at the tricky politics here and thinking, “We should move on.”

If an organization does decide to move its gala, what challenges does it face in finding an alternate venue in Palm Beach?

Well, a lot of them note that Mar-a-Lago really is a particularly popular venue. It's an oceanside resort with a tony mansion on top of a 20-acre estate. So it's a large venue that's very nice. They say that the staff there is great. And it can hold large events -- the ballroom can hold about 750 people, while other resorts and event spaces are a little bit smaller than that.

How much does it cost to hold an event at Mar-a-Lago?

I don't remember offhand, but I believe one of the groups spent about $500,000. That includes costs that are not provided by Mar-a-Lago itself -- outside of entertainment and things like that.  I believe there was another group on the lower end that paid about $33,000. So it varies based on the size of the event. In talking to a lot of these charities, Mar-a-Lago certainly is one of the more expensive venues to hold a gala or a ball.

But for many of them, it must be worth it.

Right. For many of them it’s worth it and they see a big spread on the event. The goal for many of them is to wine and dine a lot of wealthy folks in Palm Beach -- and then get a gift later.

Is it a conflict of interest for a charity to have an event at a club that's owned by the president?

And, by the same token, is it a conflict of interest for the president to host a charity’s event at his property? I think there's a real divide among charity's supporters. I think some are aghast that charities are continuing to stick with the president's property because he's a polarizing figure and there are many people who have strong feelings about him. Others aren't so worried about it. They think, “This is a charitable event in which we're raising money for a good cause. So who really cares about the venue?” As far as the conflict question goes, I had at least one observer say to me, “The president has vast business interests. One charity event isn't going to be that big of a deal to him.”

Can a sitting president attend a fundraising event?

Certainly. Look, I'm not a lawyer. I think there are laws regarding direct influence or bribes. But I don't think there's anything that prevents the president from showing up at charitable events.

Tim Sandoval, reporter with the Chronicle of Philanthropy -- thanks very much for your time.

Climate Decision Could Speed Up Damage To Trump Properties

President Donald Trump's decision to pull out of the Paris climate agreement could accelerate damage to his family's real estate empire in the coming decades, especially his properties that lie just feet from the encroaching sea in low-lying South Florida.