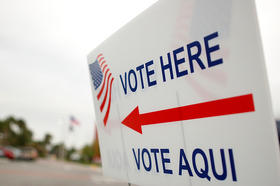 A Tallahassee judge has ordered three proposed constitutional amendments be stricken from the Florida ballot. Judge Karen Grievers says because the proposals contain several issues bundled into one, voters would not be able to answer with a simple yes or no.

Robert Barnas  a former High Springs city commissioner and petitioner in the case, says that’s the reason he wanted to see the case move forward.

“The way they bundled it and put two items, or three items, or four items together that made no sense or had no connection was improper and it left the voters confused and it would have certainly affected votes,” Barnas says.

For example, one proposed amendment included a ban on vaping in work places and also a ban on off-shore drilling. The state argues those issues are linked because both relate to the environment. But in her ruling Judge Gievers says the court is “unconvinced.” The state has appealed the ruling. Supervisors of election must begin mailing ballots to overseas voters this month.

Many of the proposed constitutional amendments heading for the Florida ballot this November are facing at least one challenge.  Tallahassee judge Karen Gievers heard arguments Wednesday about whether proposals bundled by the Constitution Revision Commission should go before voters.

Attorney General Pam Bondi’s office is asking the Florida Supreme Court to reject a legal challenge that seeks to block six proposed constitutional amendments from going on the November ballot.

The League of Women Voters of Florida is hoping to persuade a Leon County Circuit judge today to strip a constitutional amendment proposal off the November ballot. The amendment in question is number eight, which combines several issues into one proposal like term limits for local school board, mandating civics be taught. But  the part the league takes issue with the section that deals with approving new charter schools.

Arguing that Floridians shouldn’t be asked to vote on ballot measures that patch together unrelated issues, a legal challenge filed Tuesday at the state Supreme Court seeks to scuttle six proposed constitutional amendments.