Enrique Martinez was dripping water when he walked into Fifth Street Counseling Center, in Plantation, on a Tuesday evening last July.

Summer in South Florida usually means rain and it was pouring rain that afternoon while he commuted from the sober home in Margate where he has been living to his monthly appointment at the clinic. It takes him over an hour to get there. First, he takes a bus and then he finishes the trip on his bike.

Martinez has sought treatment for opiates and meth at least four times during the last decade. His cravings used to wake him up if he hadn't used recently enough. He said the effort it takes to get to Fifth Street is well worth it for him.

Martinez came to the clinic to receive his fifth shot of Vivitrol in the last five months.

"It's just...I don't feel turned on by drugs as much," he said. "It normally is like a constant, especially in early recovery, it's a constant thing that's in my mind, it's like, pestering me."

Vivitrol is a medication used to treat opioid addiction. It's a monthly shot that reduces cravings for opioid drugs by blocking the receptors in the brain that absorb them. It gets injected into the butt muscle once a month. It can only be administered by a physician.

Vivitrol has been approved by the Federal Drug Administration to treat addiction since 2006, but it is only recently that Broward County has added it to its tools to help drug addicts drop the habit.

Broward started using the medication in its treatment programs just in January of this year - close to eight months ago. County officials had been trying to secure funding for the drug for several years as opioid overdose deaths in Broward rise. Those deaths doubled two years ago in the county.

At the start of the new fiscal year this July, funding for Broward's Vivitrol programs was renewed.

But Vivitrol is a brand name for the cheaper generic drug that comes in pill-form, called Naltrexone.

Vivitrol can cost anywhere from $1,100 to $1,600 dollars per shot. That serves one patient, for one month. However, the trade-off is that there is no need to take a pill every day - which helps addicts who worry about abusing pills. 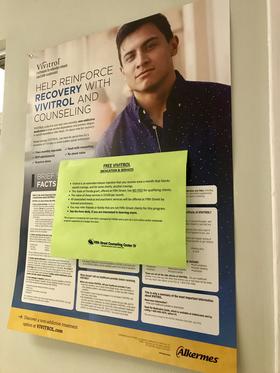 There’s a lot of money being spent now on medications to fight addiction: The money for Broward County providers to pay for Vivitrol comes from a pool of $6 million dollars that the state of Florida set aside for the Office of the State Court Administrator to use with the Florida Alcohol and Drug Abuse Association (FADAA) for medication-assisted treatments.

In total, Florida allocated more than $53 million dollars this year to drug abuse prevention and treatments. Broward County providers share in those funds with the rest of the state.

Martinez - like many people in Broward using Vivitrol - is able to get the medication for free through Fifth Street Counseling Center's program. It is free for anyone as long as they can prove that they aren't able to afford it on their own, or their health insurance won't cover it.

Kjelson serves on The United Way of Broward County Commission on Substance Abuse, which is the response team trying to come up with more local solutions to the opioid crisis. While he thinks the medication is one good treatment option for patients, he questions if there aren't smarter ways for Florida to use the funding being allotted for Vivitrol.

There are two other approved drugs used to fight opioid cravings in addicts: Buprenorphine and methadone. But both are forms of opioids that someone will eventually still need to detox off of after using. Vivitrol is not.

Vivitrol is a non-opioid, and non-addictive option for people battling addiction.

That's part of the reason why the medication is getting more widely used in court systems across the country, including in Broward County. Fifth Street is an approved treatment provider for Broward County's drug court system and also for the state's Department of Children and Families, DCF.

But the other reason it's becoming more widely used in government systems, including Florida, is its marketing strategy.

Most drug companies market their medications to doctors. However, the company that manufactures Vivitrol - called Alkermes - uses lobbyists to market its drug directly to judges and policymakers.

Florida’s latest bill to combat substance abuse funds all three available treatments, but Vivitrol is the only direct brand. It specifically names the "Naltrexone extended-release injectable". There's only one, and it's Vivitrol.

"We're getting good results, I don't want to diminish the drug, I have a good relationship with them," Dr. Fahie said. "But I'm honest and so...it is not in awe."

Alkermes has a political action committee that has been donating thousands of dollars to Florida politicians for several election cycles now, since before 2016.

Florida Senator Lizbeth Benacquisto received a $1,000 campaign contribution from the company in 2016, as did Representative Jim Boyd in 2015. They sponsored versions of this year's controlled substances bill that provides funding for Vivitrol.

Representative Bryan Avila also worked on the bill and received the same $1,000 campaign contribution from the company.

Benacquisto, Boyd, and Avila did not respond to requests for an interview.

Kjelson, from NSU, said the political money shouldn't diminish what the drug can do for people, but it can't be ignored either.

"We have to be able to recognize when certain things are being, you know, enticed to use, or subsidized to use - or being paid for," he said.

Martinez says he hasn’t got back to using drugs, but it wasn't only opioids that he was addicted to. He also used meth. But Vivitrol does not block the receptors in your brain that absorb amphetamine drugs. And that has led to an uptick in people turning to meth to get high in some places across the country, like Vinton County, Ohio.

Dr. Fahie said, just in the little over half of a year since incorporating Vivitrol into county treatment plans, he has not seen meth use on the rise in Broward County. Yet, anyway.

He also said, as it is with any addiction treatment program, patients who are the successful ones and can stay sober, are the ones who have a support network from family or friends.

"They have to have psycho-social support, and I can't over-stress that," He said. "It can't just be the shot alone."

Broward County is about to get more money for programs helping people fight their opioid addictions.

The federal government set aside nearly $1 billion to fight the opioid crisis nationwide this year. Florida is set to receive $49.3 million from those funds, of which  an estimated $7-10 million is going to Broward County.

County officials don’t know yet exactly how much they will get.

Florida was one of several states last year to declare a state of emergency because of opioid abuse. But despite efforts by state and federal officials, some local teens don't feel like enough is being done to help students.

The head of the nation's top public health agency says the opioid epidemic will be one of his priorities, and he revealed a personal reason for it: His son almost died from taking cocaine contaminated with the powerful painkiller fentanyl.