Florida lawmakers want to cut penalties for people who accidentally show their concealed weapons. The bill is ready for a floor vote in the House. But gun control advocates are worried the plan is a step towards open carry. 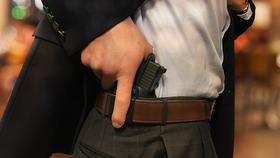 Florida is one of just a handful of states to ban the open carry of guns. But Floridians do have the right to concealed carry, if they have a license. And there are real consequences if someone flashes what should be a concealed weapon, whether they have a permit or not.

Eagle's bill would give concealed carry permit holders the benefit of the doubt.

Eagle’s bill would also change the ban on open carry. Eagle says the law should be more forgiving when some of the state’s 1.8 million permit holders slip up. For reference, Eagle says there are about 150 of these cases per year.

“So these law-abiding otherwise well-intentioned citizens are being arrested and prosecuted for this accident,” Eagle said.

Eagle’s bill would allow for temporary displays, instead of brief ones. And gun control advocates argue the difference between the two is significant. Jamie Ito is with Moms Demand Action for Gun Sense in America.

“This change from brief to temporary was not noted in the bill analysis and it is important to understand and to consider the implications of this change," Ito said. “The safe harbor in this bill is much broader than that under existing law."

She says the change amounts to a backdoor legalization of open carry.

“Furthermore, the reductions in penalties found at [Florida Statutes] section 790.053 subparagraph 3 for conduct that is deemed to violate this law to a mere noncriminal $25 fine will incentivize people to violate the law,” Ito said.

Marion Hammer, who represents the NRA, insists the bill is not about open carry.

“This bill does not legalize open carry," Hammer said. "I wish it did.”

But some democratic lawmakers have issues with the language too, like Dania Beach Representative Joe Geller.

“I think that we’re opening a door here that is wider than what I take, from what I’ve heard, to be what the sponsor intends,” Geller said. “I think the law as currently written adequately balances the fact that sometimes something happens by accident, with attempting to deter someone from some kind of a brandishment.”

Open carry or not, Rick Soskis is simply worried about the presence of guns in public. He’s a retired nurse and was a longtime gun owner. But after thirty years of working in an emergency room, he told state lawmakers he doesn’t carry anymore.

The measure passed its last House committee on a largely party line vote. It’s now ready for the floor. But the plan is getting virtually no traction in the Senate. Lawmakers there have already blocked a similar bill.

Measures that would help clear the way for people with concealed-weapons licenses to carry guns at churches and other religious institutions are ready to go to the House and Senate floors.