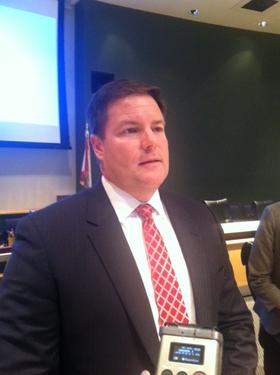 Florida lawmakers are watching a projected $1 billion surplus disappear before their eyes. The cause: the impending loss of $1 billion in federal funds that support hospitals that treat low-income, uninsured patients. Both Governor Rick Scott and House Speaker Steve Crisafulli are counting on that money to come down, but the Senate is not. Tuesday the Senate's Health Policy Committee approved a plan to  pull down $50 billion in federal funding to expand Medicaid with the intent that the Medicaid money would more than offset the loss of the Low-Income Pool Funds.Lynn Hatter speaks with Tom Flanigan about the impending clash between the House and Senate on whether and how to expand Medicaid in Florida.

Health Policy Committee Chairman Aaron Bean describes his plan as a "snowball's" chance-- but remains optimistic  the two chambers can reach some sort of consensus on a Medicaid expansion. Still, Bean says, it's still early in the session and discussions have been intermittant:

"More and more everyday," he says, describing the current state of conversations over Medicaid between the House and Senate."I look forward to having that debate going forward."

That debate is already underway, with the Senate making its position known early. The plan approved Tuesday by the Senate Health Policy Committee steers people who qualify for coverage under the Affordable Care Act's Medicaid expansion, into private health plans offered under a Florida-based insurance exchange. That insurance exchange is modeled off two existing programs. Recipients would receive vouchers to purchase the plans and there would be work requirements, co-pays and premiums ranging from $3 to $25 based on income.

It would also set up personal health savings accounts, but most importantly, it would allow Florida to pull down $50 billion in federal money to fund the program. The Senate has long supported such a plan, but the House has managed to stymie it for the past two years.

Now the state is in an unexpected budget hole, and according to a recent study, accepting the Medicaid money could potentially offset the loss of the Low-Income Pool Funds. Still, Governor Rick Scott and House leaders are including the LIP money in their proposed budgets, and that's a problem, says Republican Senator Bill Galvano.

"These are Florida dollars, they don’t come out the ground in Washington D.C. They come out of our pockets in the state of Florida. And I assure you, and the Florida House, that this will be the cornerstone of our 2015-2015 budget.”

The Senate is digging in to it's pro-expansion position. And former Senate President Don Gaetz is taking swipes at expansion opponents.

“If you hold both positions—that you want the LIP money, but you don’t want federal money, then it seems to me that it’s selective indignation.”

Opposition to expansion is dwindling, but it still remains. The current argument is that the federal government can't be trusted to uphold its end of the bargain. And Medicaid expansion opponents point to the impending loss of the Low-Income Pool funding as a primary example of that.

“Proponents think they can accept billions of dollars in federal deficit spending on their own terms, without having to acknowledge the heavy strings that come attached to federal funding,” said Americans For Prosperity, Florida State Director Chris Hudson.  “Americans for Prosperity has been watching Medicaid expansions unfold across the country, and we see the results: Medicaid expansion doesn’t work," he said in a written statement.

The James Madison Institute, AFP and Florida Chamber of Commerce all oppose the Senate's plan.

An alternative to Medicaid expansion is being proposed in the Senate in a bill that would use federal funds to offer health insurance to nearly 1 million low-income Floridians.

Thursday's proposal from Sen. Aaron Bean's Health Policy Committee will still allow the state to take billions of federal dollars, but would give consumers vouchers to purchase private insurance. The Republican-led Legislature has been opposed to Medicaid expansion but has been more open to this option.

Florida Hospital CEO Lars Houmann was in Tallahassee as the legislative session kicked off, urging lawmakers to take billions of dollars and give health care to nearly a million more Floridians.

No Medicaid Expansion? No Problem For Many Safety-Net Hospital Profits

Hospitals that treat many poor and uninsured patients were expected to face tough financial times in states that did not expand Medicaid under the federal law known as Obamacare.

That’s because they would get less Medicare and Medicaid funding under the Affordable Care Act, while still having to provide high levels of charity care.

The Republican-led Florida Legislature kicked off its annual session Tuesday with the usual pomp, but the celebratory nature was overshadowed by lingering questions about the state budget, tax cuts and health care.

The two GOP legislators in charge opened the session by stressing areas on which they plan to work in tandem over the next 60 days. That included dealing with the state's standardized testing system.