Military families move a lot, and that makes it hard for service members’ spouses to hold steady jobs. About half of military spouses are either unemployed or underemployed – and that can take a toll on their families, their earning power, and the economy.

When Anne Schons describes her career, she uses the word "imagine" a lot.

In college, Schons studied music education. "I had always imagined myself being a music teacher," Schons explained. "When my husband joined the Army, and I spent our first duty station getting a post-baccalaureate teaching certification for Texas."

But Schons and her husband didn’t stay in Texas. He was transferred to another base, and her career as a teacher didn’t take off. Schons tried other jobs: she even joined the Army herself for awhile. She has a masters in educational technology, and she’s on the job market in Watertown. 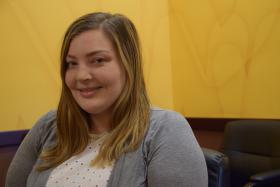 But at 30, with two young daughters and a husband who’s still in the military, it’s been a challenge to establish a civilian career.

"I’m kind of trying to imagine maybe becoming a human resources training and developer so I can utilize my education background," Shons said, "but I don’t have a lot of versatility in what I can do depending on what location we end up in."

Schons’ husband will be transferred to Fort Lee, Virginia this winter. And that’s left her in a tough spot: should she get a short-term job, or should she wait another 6 months until they move?

Kathy Roth-Douquet, CEO of Blue Star Families, a military family advocacy group, says Schon’s story is not uncommon among military spouses, the vast majority of whom are women.

"You don’t have those connections that help you find jobs, you’re at the bottom of the list for child care, you have all these structural problems that are impeding you from getting going," Roth-Douquet said.

According to the RAND Corporation, military spouses are about 1.5 times more likely to be unemployed than their civilian counterparts. And spouses that do have jobs are often underemployed.

Roth-Douquet says it cost the U.S. economy approximately a billion dollars a year in lost wages and spending. And it places a big burden on military families.

Entrepreneur and Watertown military spouse Liza Rodewald was already working from home as a software developer when her husband joined the Army. When they moved to Fort Campbell, Kentucky, for her husband's job, she noticed something about the women in her new neighborhood:

"They were highly educated," Rodewald recalled. "We had architects and accountants, and they were struggling with employment because they had moved so many times."

So when a friend asked her if she wanted to help start a military spouse job site, she jumped at the chance. Together they co-founded Hire Mad Skills, a company that places military spouses in remote jobs so they can work from home and keep their jobs when they move.

"You know as an employer if you’re trying to hire somebody you need somebody who can roll with it, who can jump right in, and military spouses by default are just like that because they’re thrown into situations," Rodewald said.

This past year, Hire Mad Skills placed 75 military spouses in remote jobs in fields like IT, sales, and marketing.

That won’t come fast enough for people like Anne Schons.

For now, Schons is enrolled in a human resources training program at Fort Drum. She’s put her resume on Hire Mad Skills, and beefed up her LinkedIn profile. And she’s hoping for the best.

"I’m keeping myself really open, but I’m also trying to develop my soft skills as much as I can to be ready when the opportunity comes," said Schons.

She hopes that opportunity that will come soon, maybe as a remote job. That way another military move won’t stop her from building her career.

Veterans’ issues were among the few things Congress agreed upon – before taking their August recess. That included senators confirming three new judges to the U.S. Court of Appeals for Veterans Claims to reduce the massive backlog of disputed veterans’ claims.

After A Bribery Scandal, Is The Navy Doing Enough to Change Its Culture?

28 people have been charged so far in the so-called "Fat Leonard" bribery scandal. While the Navy has beefed up its ethics training, it also faces longstanding cultural challenges.

While the public is normally urged to “thank a Veteran” they meet, the head of Florida’s Department of Veterans' Affairs also wants people to ask a state vet about their earned federal and state health benefits.