So-called "burn pits" were common at U.S. military outposts in Iraq and Afghanistan. Legislation in the Senate would create a center to study the effects of breathing their smoke.

Listen
Listening...
/
Jay Price reports that Congress may establish a center to study the health effects of burn pits.

U.S. troops in Iraq and Afghanistan burned all kinds of waste -- tons of it every day at some bases. Plastic and foam dinnerware from chow halls. Batteries. Paint. Tires. You name it.

For service members working and living nearby, it was hard to avoid burning the smoke.

"The smell was constant. You could smell it everywhere you went," said Cindy Aman, who was a military police officer on several bases in the Middle East.

Aman, 38, now lives in Delaware. After leaving the service, she joined a civilian police force and ran five or six miles a day to stay fit. But she started having trouble breathing.

"I got to the point where I definitely wasn't running anywhere close to that, and then I couldn't even walk up a flight of stairs without being short of breath," she said.

Aman had to quit her job. Doctors were puzzled, but eventually, after she demanded a painful lung biopsy, she was diagnosed with something called constrictive bronchiolitis. Some researchers say the rare lung disease is unusually common among troops who were deployed to Iraq and Afghanistan. 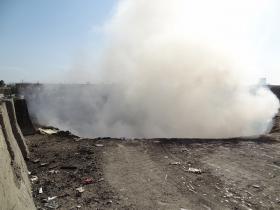 Aman suspects burn pit smoke is the main cause of her condition, combined with other pollutants she was exposed to in the Middle East, such as dust from the frequent sand storms.

"That particulate matter over there so much finer than anywhere else in the world, so when you're inhaling that our bodies are aren't used to it and can't expel it like normal," Aman said. "So I think it was a combination of everything."

Legislation in the U.S. Senate calls on the Department of Veterans Afffairs to start a center to address the possible effects of exposure to burn pits and other environmental hazards in Afghanistan and Iraq.

Researchers have already begun studying the issue, but they have a lot to untangle.

Different bases burned different things. Many troops, including Aman, served in several places. And troops with different jobs would have been exposed to different toxins.

What's more, the so-called "moondust"  in parts of southern Afghanistan -- the powdery sand that coats everything -- was different from the airborne grit in southern Iraq, or the smog, dust and fecal matter from open sewers in Kabul. 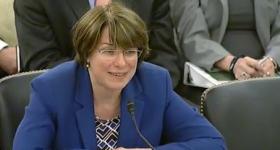 "Medical geology is a branch of geology that helps understand impacts of the earth and earth materials like dust, soils and rocks on human health," explained  Geoff Plumlee, a research geochemist and Associate Director of Environmental Health for the U.S. Geological Survey.

Plumlee is among a small number of geologists who work on medical issues. They have increasingly been called in to help doctors and public health experts untangle complex issues involving like drifting volcanic and wildfire ash, naturally-occurring poisons in water and mine waste, and microbes in soil that cause disease.

Plumlee and other geologists at the geological survey have been helping researchers at National Jewish Health in Denver study tissue from lung biopsies like the one Aman got.

"A pathologist will take a look at a slice of that tissue, then we'll get a slice," Plumlee said. "We can identify what the different minerals that are present within the tissue are."

They can tell whether it’s a desert dust, or, say, an occupational exposure, like steel particles from welding.

The researchers at the Denver hospital are writing up the results of the study now. And they're planning more research, like finding a way to diagnose deployment-related lung problems without painful biopsies.

"The primary goal among our membership is they simply would want to be treated," said Tom Porter, the legislative director for the Iraq and Afghanistan Veterans of America.

"We've got a recent member survey where seventy-four percent of those respondents report that they were exposed to burn pits and other substances in the air, and sixty percent of those say that they've got symptoms as a result."

Porter himself says his two years serving in Kabul and in the Middle East gave him asthma.

"I first noticed it in Afghanistan," Porter said. "I was there for a year, and shortly after I arrived I had severe reactions to in my lungs to the pollution in the air."

Porter's organization was one of the backers of a federal law passed two years ago that directed the VA to create a registry of veterans who believe they were exposed to smoke from the pits. Nearly 75,000 have signed up, but Porter says it’s crucial that more add their names to the list.

Listen to reporter Jay Price talk more about burn pits on WUNC's "The State of Things."

A father provides the stories and a professional artist the paint to create a portrait of Air Force Capt. James Steel, an F-16 pilot who was born in Tampa and killed in Afghanistan on April 3, 2013.

James and his twin brother Jonathan loved playing on the Bay Area beaches as their father, Major General Robert Steel, flew F-16s with the 61st Fighter Squadron at MacDill Air Force Base.

A Fallen Member of an All-Female Team

Among those who will be remembered this Memorial Day is 1st Lt. Ashley White, a member of an all-female, all-Army Cultural Support Team attached to a Joint Special Operations Task Force in Afghanistan.

White is buried behind her family’s church in Ohio. It’s the same church where she was baptized and where she married Capt. Jason Stumpf six months before she was killed.

The family had the option of burying Ashley at Arlington National Cemetery,

A Message for Iraq and Afghanistan Veterans

There are a lot of patriotic messages on July 4th. Here are some words of encouragement specifically for those who served in Iraq and Afghanistan.

This comes from a portion of the talk delivered by Commandant of the Marine Corps Gen. James F. Amos at the June 18, 2014, Change of Command at MARCENT – the Marine Command at U.S. Central Command based at MacDill Air Force Base, Tampa, FL.