Sea-level rise is going to cost Broward County -- and leaders don't know yet how they're going to pay.

A roundtable meeting in Davie on Thursday brought together more than 40 elected officials, city staff and business leaders from across Broward. Many expressed concern over a lack of funding for sea-level rise adaptation projects.

"If we're in the western communities, we have to wait for the flooding in the eastern communities to drain first," Wallace said. "So what funding is available to help with assuring that these areas that are landlocked have the opportunity to drain?"

The county can't offer any funding right now, said Broward Mayor Beam Furr. In 2016, voters nixed a proposed penny sales tax to address traffic and infrastructure challenges. Nine percent of the proceeds would have gone to water, sewer and stormwater projects, according to the South Florida Sun-Sentinel.

But the bigger challenge for Broward -- and the rest of South Florida -- is a lack of state and federal dollars for adaptation efforts.

County leaders including Furr and chief resilience officer Jennifer Jurado said that in the absence of significant funding from the state and federal government, the county is creating tools to help cities address the growing sea-level rise threat. Broward has approved an update to its flood map, which will make the map more comprehensive than flood maps used by the federal government. The federal flood maps currently do not factor in sea-level rise.

Beyond the threat of flooding, leaders in Broward and throughout South Florida are worried rising seas could spell trouble for the real estate market that helps drive the region's economy. The fear is that once the federal government does begin factoring sea-level rise into its maps, insurance prices will increase, raising costs to businesses and homeowners, and scaring away investors.

The change to federal maps could happen as soon as 2020, Jurado told the group. 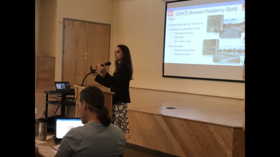 "We know that's critical to us," she said. Banks and investors look at insurance rates when they're deciding whether to approve loans and fund projects. High insurance rates will suggest it's risky to put money into South Florida.

But, Jurado emphasized, the agencies that guide investors, insurers and banks do take into account efforts communities make to reduce the risk from sea-level rise.

"We're going to need to be able to respond with projects," she said.

Read more: Is South Florida Doomed By Sea-Level Rise? Experts Say No. In Fact, They're Optimistic

Throughout South Florida, efforts are underway to address rising seas. Furr, the Broward mayor, said that it's important that cities and counties continue to work together.

If the federal government does begin to offer more funding to address sea-level rise, he said, South Florida communities will be more likely to receive it if they have a comprehensive, collaborative plan.

"Because soon, people that rate bonds and those things, they're going to come to us and ask, 'what is your strategy?'" he said. "It's all of our problem. It's every city. It's the entire county."

Sea-Level Rise Might Soon Raise Insurance Costs. Here's What Local Leaders Want To Do About It

If you thought sea-level rise was the greatest immediate threat to South Florida’s future, you may need to think again.

There’s growing concern that the perception of the sea-level rise threat by insurers, banks and investors might submerge South Florida before rising seas do.

Days after eight kids sued the state of Florida for policies they say contribute to climate change, a coalition of environment groups has launched a statewide campaign to get Floridians engaged on the issue.

'The Most Upsetting Thing Anyone Can Imagine:' Kids Sue Florida Over Climate Change

They say it's not just inaction. The lawsuit states Florida officials have pursued policies that worsen the threat from greenhouse gas emissions, and violate Floridians' constitutional rights to health, prosperity and happiness.

A scientific paper published in February may pave the way for a new conversation about rising sea levels using data instead of projections.